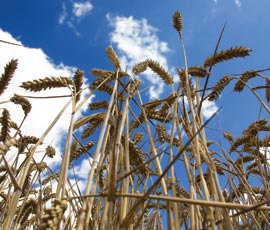 Trade for standing straw is showing up big differences in the prices achieved for the best and worst crops, according to latest auction results.

Gloucestershire-based David James and Partners said it had sold 408 acres of wheat at an average of £68/acre but with a top price of £130/acre.

Surveyer Will Weaver said the highest price had been achieved for a block of winter wheat in north Somerset, which had a number of local buyers interested because there was not much wheat in that particular area.

“What we also saw is that access drove the sales. If a field was accessed off a main road, then it sold well compared to fields down a track.”

Mr Weaver said overall prices were slightly down on last year’s averages, but trade was much more up and down.

Peter Kirby, a partner at Sunderlands and Thompson in Herefordshire, said the company had sold in excess of 5,000 acres of standing crops in the past few weeks.

Autumn-sown crops had been making £60-100/acre, with exceptional crops of winter wheat making well over £100/acre, he said.

“Prices are broadly the same as last year. Crops are variable because of the weather, although vendors have tried to take account of any bare patches, but it has been important for purchasers to view them before auction,” he said.

Barbours in Shropshire, which sold more than 1,400 acres of standing crops at an auction on Thursday (11 July), said winter barley had made between £52-92/acre and averaged £73/acre. Winter wheat had made £40-80/acre with an average of £60/acre and wholecrop had made £370/acre.

Read more about prices and trends