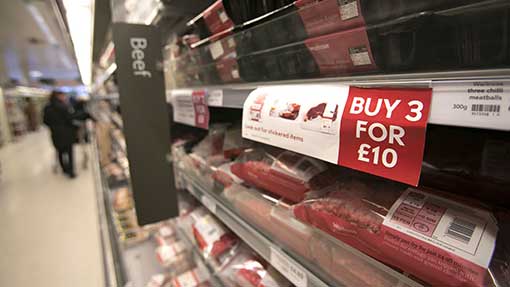 The NFU has called on retailers to stop mixing British and cheaper Irish beef on their shelves and to consider promotions to reignite consumer demand.

Last week Farmers Weekly reported that farmers feared for the industry’s future, as farmgate prices had fallen about 30p/kg since the start of the year while on-shelf prices had kept growing.

Farm leaders blamed low consumer demand and rising Irish imports, which grew 11% in the first two months of 2014 and are about 48p/kg cheaper on average.

NFU beef group chairman Andy Foot said the public needed to know what the retailers were doing sent out the wrong vibes to those looking to invest.

“One of the big issues is proper segregation on shelves,” he said. “A lot of the time they have been allowed to get away with having British and Irish [mixed] on shelves.

“The other big thing is beef has not been on promotion for quite a while. The supermarkets say sales have been decreasing and their margin has been going up.”

The NFU will also be holding talks on the beef industry’s problems with the other British farming unions and the Irish Farmers Association. Thousands of Irish farmers took to the Dublin streets this spring to protest against their own shrinking returns.

National Beef Association chief executive Chris Mallon said British farmers had to be selfish and promote their own, high-quality product.

“I sympathise with the Irish farmers, but my first concern would be for British beef farmers who are struggling, only to lose £150 a head.

“British retailers should be trying to support British product first. We have to fight as hard for our market share in Britain as we can.”

NFU Scotland announced it would be working with the Scottish Association of Meat Wholesalers on a price and marketing strategy.