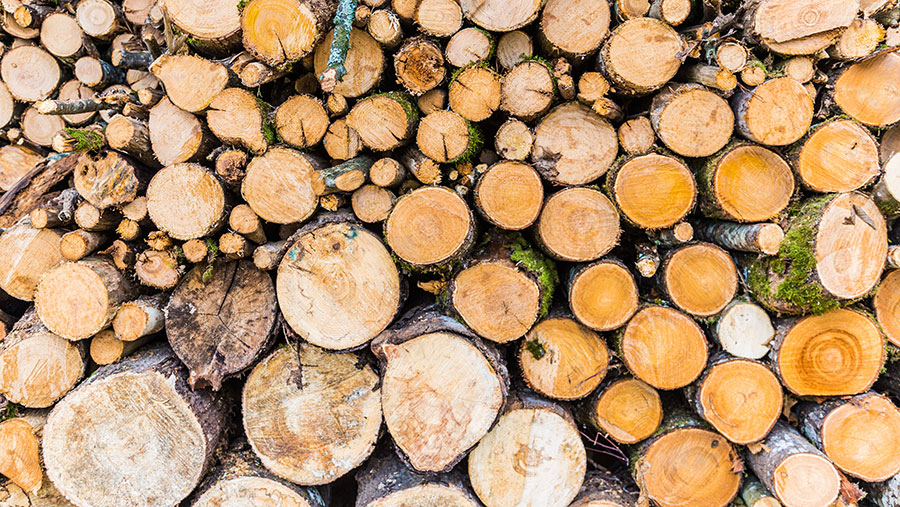 Soaring timber and firewood prices should act as an incentive for more farmers to consider planting trees or better manage areas of existing woodland on their farms, according to forestry body Confor.

Figures from the Forestry Commission show timber prices have risen by almost 30% in a year and are nearly double the level of a decade ago.

The statistics show a 28.2% surge in the price of standing timber – trees which have not yet been harvested – from March 2017 to March 2018.

The average price for coniferous standing sales is now about £24.64/cu m overbark (this means it includes the bark in the measurement).

Andrew Heald, Confor’s technical director, said prices were even higher in some regional hotspots, including Wales and Dumfries and Galloway in southern Scotland.

Firewood prices had also risen and were about £50-60/t.

With demand for timber predicted to remain high at a domestic and global level, Confor is calling for a long-term approach to forestry to secure future supply.

“Scotland is increasing planting rates but the rest of the UK is lagging behind and the supply crisis will only get worse in the years and decades to come unless we tackle this problem now,” he said.

“These statistics highlight the need for forestry and wood processing to be a much more central focus of the rural economy after Brexit.”

Mr Heald said many farmers and landowners were realising the benefits of planting part of their land with trees.

“For those who already have trees, but have maybe not managed them well – or who have timber in hard-to-access locations – now is the time to have that asset valued and look at realising a great price.

“When you have done that, you can replant the land and then consider extending the area covered by trees.”

Mr Heald told Farmers Weekly the size at which a woodland would become a viable proposition for timber was very location specific.

“You could have a small woodland of 4-5ha, which is near a road and easy to work, but if it is down a narrow track then you might need 10-15ha,” he said.

Farmers who wanted to cut and sell timber would need a felling license before they proceeded, he said.

They could obtain this direct from the Forestry Commission, although it might be advisable to first contact a professional forester through the Institute of Chartered Foresters to get some advice on the best way to manage the project and how to market the wood.

The push for plantings

The UK is the world’s second largest net importer of timber after China, but the creation of new woodland in England is at a 46-year low.

Strong demand for timber is coming from the construction sector, pallet market, as well as from the agricultural and garden fence sector, biomass and woodchip industries.

To increase domestic supplies and reduce the UK’s reliance on imports, Confor has identified key areas in the north and west of England which it says should be designated as forestry investment zones with the aim of promoting large-scale woodland creation.

It says these are areas with land suitable for timber production and with sizeable timber processing facilities already located in the vicinity.

The first investment zone it has selected is in Cumbria, with other local authority areas as follows: