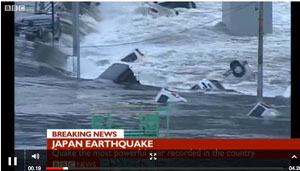 Last month’s Japanese tsunami will have a wide-reaching impact on agriculture, say analysts.

The effect on Japan’s food and agriculture industry could be dire and felt far beyond the country’s borders, says a Rabobank report.

The combined effects of food-safety concerns and supply shortages are likely to limit exports and cause imports to rise.

The overall impact on the global food commodity market may be moderate, says the document. But imports from the US, Australia and China are expected to rise as Japan comes to terms with the magnitude of the disaster.

Rabobank analyst Jean-Yves Chow said: “While the situation is still evolving, the domino effect of the disaster will likely result in more imports.”

He added: “The radiation issues at the Fukushima plant have heightened food safety concerns at a time when Japanese food self-sufficiency is already low.” Japan may need to revise its food security strategy to manage the country’s risk boost confidence in its food products, said Mr Chow.

The Rabobank report estimates the impact on major sectors of Japan’s agricultural industry.

High year-end stocks means rice availability is not immediately threatened so there is no immediate need for imports.
But Japan is heavily dependent on imported wheat.

Most processing mills are outside the damage zone but power shortages are temporarily impacting processing production.
Some 15% of Japan’s compound feed industry capacity is believed damaged.

Bottlenecks in feed capacity will likely defer demand for corn and potential damage to domestic livestock could even decrease demand, said Mr Chow.

Meanwhile, a significant part of Japan’s pork, poultry and beef industries are located in the impacted region.

The Rabobank report says primary production damage could translate into a 70-350,000t loss in total meat output.
Increased reliance on imports may trigger safeguard tariff increases for beef or pork, says the document.