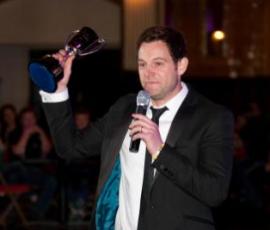 TV presenter Matt Baker was voted the new president of the National Federation of Young Farmers Clubs at its AGM (Sunday May 8).

The Countryfile and One Show front man, who was also runner-up in the 2010 Strictly Come Dancing, promised to use his profile and contacts to promote the organisation and communicate agricultural messages to the general public.

“It’s a real honour for me to become president,” he told the 350-plus people at a packed AGM in Blackpool.

“There is a new appreciation of our British countryside – and agriculture is changing rapidly. Young Farmers are the future and Young Farmers Clubs members have the energy and enthusiasm to drive this industry forward.”

Matt added: “As a farmer’s son from the Durham Dales, the countryside is a big part of who I am.”

He urged members to get in touch with their suggestions for what he should prioritise for his year in office.

“I want to hear your ideas and, in true YFC-style, there to be a connection between your ideas and what I do. I’m really excited and I think we can do some special things.”

Born and brought up on a family sheep farm, Matt was chosen by members for his long-standing connection with the organisation (his mum, Janice, is Durham YFC’s county organiser), his love of the countryside and his agricultural expertise. NFYFC chairman James Chapman dubbed him ‘the ideal ambassador’ for the YFC family”.

One-time Blue Peter presenter Matt takes over from retiring national president Lionel Hill, who was elected life vice president in recognition of his services to the movement.

“Welcoming Matt on board at the AHM, Lionel joked to the TV star: “When I was your age, I was nearly as good looking as you – this is what 50 years of Young Farmers has done to me!”

Lionel also referred to how his family had enthusiastically supported the new president when he was appearing in the BBC’s hit show Strictly. “I’ll be sending you an invoice for £1756,” he said, “which is about the amount my grandchildren spent on voting for you!”

* For more news, pictures and video from the young farmers AGM see our dedicated page.