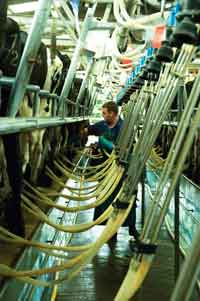 UK milk prices are falling further behind those elsewhere in Europe, according to the latest research.

The DG Agri figures published in this week’s DairyCo market update showed that in March, the average UK price stood at 24.1p/litre, 2.5p/litre (9%) below the EU-25 average of 26.6p/litre.

That meant the UK’s position among the EU-25 had slipped from 12th in September 2009 (when prices averaged 24.1p/litre) to 19th, just six places off the bottom.

“Farmgate prices in the UK have been slow to respond to rising commodity markets. This can partly be explained by the high level of UK production that is processed into liquid milk, which means our farmgate price is not as volatile as other EU-25 countries,” the report said.

But there were positive prospects for UK prices. The peak spring production period had been passed and the two milk price indicators, Actual Milk Price Equivalent reached 30.5p/litre and Milk for Cheese Value Equivalent moved to 30.4p/litre, DairyCo said.

“Many commentators expect farmgate prices to rise, particularly for those on commodity-based contracts.”

The DairyCo report also reported a slight (1%) downturn in UK dairy advertising. Just under £114m was spent on advertising dairy products in the UK during 2009/10, £1m less than the previous year.

Do you think UK milk processors have been cashing-in on rising commodity prices? Tell us in the FWi Forums. You can also see what we think about it in Phil Clarke’s Business Blog.