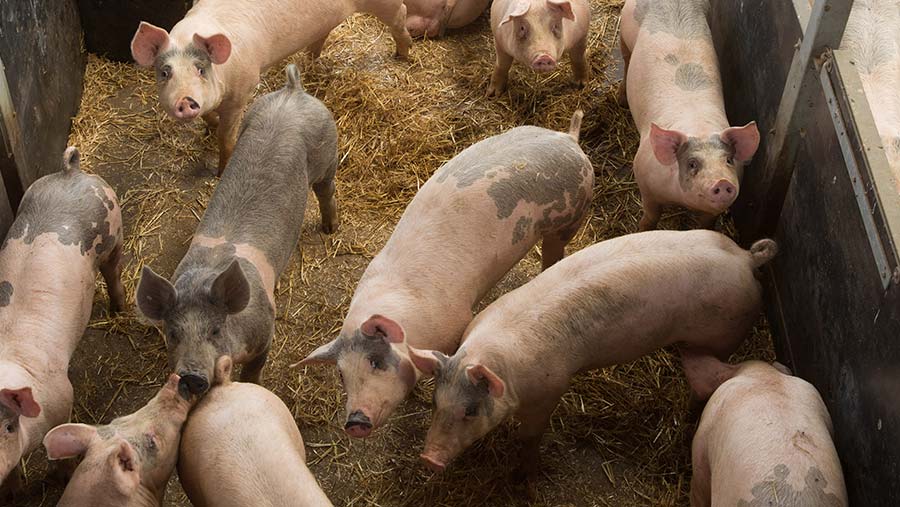 Further action is needed to address the pig crisis and ensure the government’s support package delivers on its main aim of easing the backlog of pigs on farms.

The National Pig Association (NPA) has written to Defra minister George Eustice warning that the measures could end up benefiting processors but further damaging struggling producers by forcing pig prices even lower.

Farmers are losing an average of £25 a finished pig, equating to an overall loss of £130m in the first six months of 2021. With the second half of the year set to be as bad, if not worse, the NPA fears that many pig farms will not survive unless the support package is implemented as intended.

In the letter, NPA chairman Rob Mutimer asks Defra to set up talks with processors, retailers and producers to help persuade processors to accept distress kills of heavy pigs on a liveweight basis.

This will avoid further damage to the Standard Pig Price (SPP) which is being dragged down by these pigs. They are currently being bought at 70p/kg deadweight, about half the average price normally paid for pigs falling into the SPP category.

Were these pigs to be bought liveweight, they would be excluded from the SPP calculation. Producers fear that processors are slow to respond on the liveweight payment issue because it suits them to see the SPP come down further, as other contracts are based on it.

If one processor, encouraged by Defra to take additional pigs, did so on this basis once a week, the NPA predicts the SPP would be £1.17/kg by Christmas. With a current cost of production of £1.80/kg, pig farmers will soon run out of cash to feed their pigs, it warns.

Defra did not stipulate that pigs being taken into either PSA or through additional kills must be paid for at the price for which they were originally contracted, which might well exacerbate the situation, said Mr Mutimer.

Long wait for measures to kick in

Some of the government support measures announced on 14 October are only just opening, with Private Storage Aid (PSA) and payment to abattoirs for extra shifts operational from today (16 November).

Exacerbating the situation, the late addition of boneless meat to the PSA scheme will simply increase the workload involved to get tonnage into the freezers.

The scheme was originally only to be for large bone-in cuts (six per carcass), to encourage a rapid increase in the number of pigs taken off farms.

“Since the PSA has now been altered to allow the inclusion of boneless joints, we understand that some processors will not now use PSA until the butchers on temporary visas have arrived in the UK, expected at some point in January,” said Mr Mutimer.

“This will enable them to use the resource to de-bone product and place it into storage until summer 2022 when there is expected to be a drop in supply. The PSA, therefore, rather than helping farmers reduce pigs on farm, will only serve to help processors out of a supply issue.”

The NPA also wants to see higher payments to abattoirs for putting on additional shifts to kill extra pigs. They are being offered £3 a pig by Defra for this, but the bigger processors have told the NPA they cannot encourage their staff to work additional shifts and that the £3 rate is not incentive enough.

The first date on which additional shifts can be worked is 16 November 2021 and the scheme runs until 20 December. Claims for payment can be made from 21 December until 31 January 2022, with payment taking up to 28 days.

Meat must either be put into storage under the PSA scheme for pigmeat in England, or exported.

Progress has been slow on recruiting the additional butchers needed to deal with the backlog of pigs created by abattoir staff shortages.

In the meantime, 14,000 healthy pigs have been culled and National Pig Association (NPA) chief executive Zoe Davies says she has producers contacting her every day about killing piglets simply to create a production firebreak.

The situation was not ideal, but processors were  finding the people they needed, said Nick Allen, chief executive of the British Meat Processors Association.

“How quickly we can get them here is a different question. I can’t see many arriving until early December, and then I suspect there will be a reluctance from them to come before Christmas,” he said.

Pig prices on continental Europe are at their lowest for 10 years but the European Commission has rejected calls by 13 member states for special help for the sector.

As well as demand being hit by the pandemic-related pressure on food service businesses and reduced domestic pork consumption, the loss of the Chinese export trade because of African swine fever (ASF) is significant.

The commission said that while it recognised the situation was difficult for producers, individual countries should help, using national measures while observing state-aid rules.

African swine fever (ASF) has been detected in domestic pigs in a new part of Germany, further damaging the country’s export prospects and, in turn, the UK sow and finished pig trade.

The virus has been found in a pig unit for the first time in the north-eastern state of Mecklenburg-Western Pomerania.

All previous cases had been in two states near the Polish border, with the vast majority of the more than 2,000 cases being in wild boar, along with three cases in smallholdings in Brandenburg in July.

Control measures are in place in the latest outbreak and all animals have been removed from the farm.