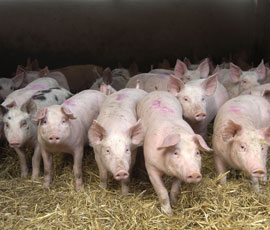 Prices for the leading processors were as follows:

Although the Deadweight Adjusted Pig Price put on another 0.33p to stand at 147.84p/kg, spot prices were generally in retreat with only a four day slaughtering week ahead and the same between Christmas and the New Year.

Spot quotes were anywhere between 2-6p down on last week within a fairly wide 144-150p/kg range, but processors also reported underlying weak demand for legs in the retail sector.

Cull sow prices have also reflected the upcoming European mainland holiday period as well as a relatively weak euro, which traded on Friday (16 December) worth 84p.

As a result most cull sow quotes slipped by 2-4p with export abattoir quotes generally between 112-116p/kg according to region and specification.

The weaner market on the other hand continues to improve helped by lower cereal prices and a better outlook for finished prices next spring.

The latest Agricultural and Horticulture Development Board 30kg ex-farm weaner average now stands at £44.03/head with spot trades reported to be £2-4 ahead of this for Freedom Food assured pigs.