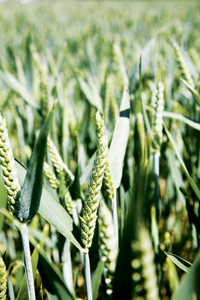 Wheat prices have fallen by more than £5/t over the past week as much-needed rain finally arrived in many areas and sterling strengthened against the euro and US dollar.

June spot prices had slipped to around £96-102/t ex farm, depending on area and feed wheat was changing hands at £95/t for summer collection, traders said. November 2010 futures prices had fallen to £102/t by Monday morning (7 June), down by around £7/t on the week.

Openfield said two factors had driven the recent price falls. “First, sterling has gained ground against the euro, each euro cent being worth £1.10/t in grain terms. Second, the weather premium that has been building in new crop over the last few weeks has been given back.”

Harvesting had also begun in Texas and Oklahoma and yields so far had been good, according to Glencore.

The firm said UK new crop feed wheat remained competitive to most destinations around the world although the weak euro had left it at a smaller discount to French wheat than previous weeks. “However that weak euro also means that French and German milling wheat looks cheap to third country destinations.”

“There are also still arguments over the extent of winterkill in the Ukraine with the government still claiming 13% while local crop analysts say it’s much less than that.”