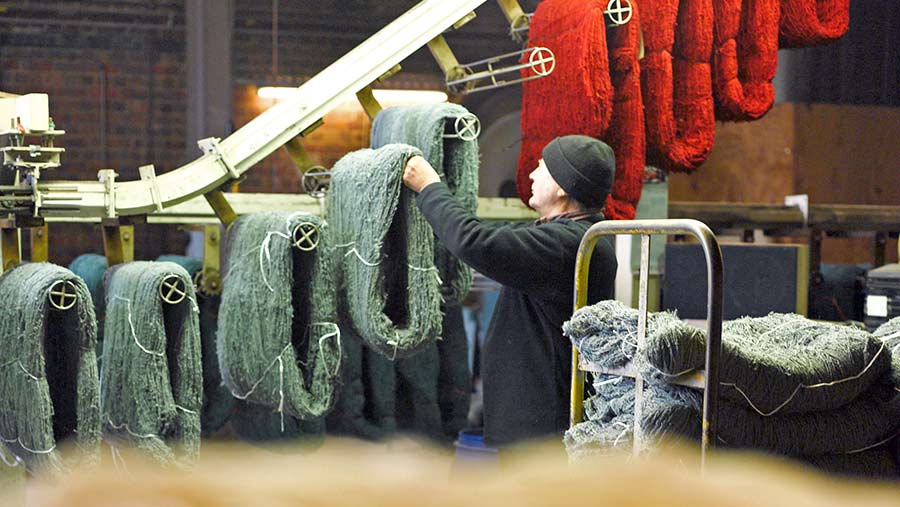 The news has been full of “plastics in the sea” stories recently and a huge contributor to this pollution are the fibres washed out of synthetic clothing by domestic washing machines.

As environmentally conscious consumers increasingly question their use of plastic and man-made fibres, this could bring new demand for British wool for both traditional and some surprising new uses.

While carpets, clothing and knitted goods still account for more than 80% of British wool, new applications are being researched and developed which could bring large scale demand for industrial uses as the life cycle impact of materials takes a higher profile.

Wool has the potential to score higher than man-made materials when the use of natural resources, greenhouse gas (GHG) emissions and other environmental impacts are assessed over the lifespan of a product.

As a natural polymer, wool offers the potential to replace some synthetic materials derived from oil. For example, wool is already being incorporated into polypropylene composite sheets to make them more fire retardant. It is also used to reinforce resin plastics.

Wool fibre could replace glass in high-value circuit boards where weight is an issue, according to New Zealand’s wool research board. Also in New Zealand, wool is being used to develop filters in personal protection breathing equipment.

More than half of the 20,000t of British wool produced every year goes into carpet manufacture. This market was severely challenged by the move to laminate flooring in the 1990s and more recently by luxury vinyl tiles, in both cases especially for hallways, say carpet manufacturers.

Worcestershire-based Adam Carpets is moving to using a higher proportion of British wool and from specific sheep breeds.

While there has traditionally been a generational transfer of the idea that a wool carpet is a worthwhile long-term investment, there is a challenge for carpet manufacturers to convince today’s younger consumers of this, says Mr Prescott.

“I’m not sure my generation has impressed this upon their children,” he says.

The company is careful to ensure waste is minimised so ends of rolls and offcuts are sold to a steel tube manufacturer and used to line and protect the tubes in transport. Any waste or surplus yarn is supplied to another manufacturer for use in premium mattresses.

Where does British wool go?

The shares of these uses have changed relatively little in recent years, according to British Wool.

The world market is currently suffering from a hangover of large New Zealand stocks. Prices at the latest British Wool sale averaged 102p/kg, compared with an average of 108p/kg through last season and a range of 115p-120p/kg over the previous three to four years.

British Wool’s wool sale manager Stephen Spencer said that there was still a lot of untapped potential in the carpet market, with Chinese interest in quality British wool. However, the Chinese apparel market had recently seen a switch to finer wools such as Merino.