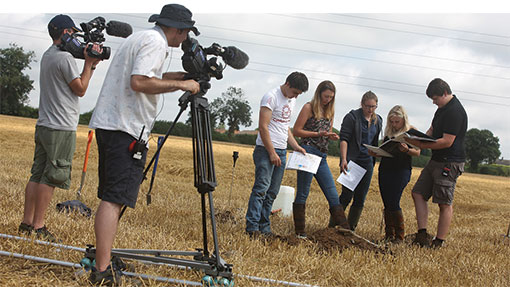 A new series of the Farmers Apprentice competition, which will see one young person walk away with £10,000, is about to start next week. Sarah Alderton has all the details on the upcoming web-TV series as the laughter, tension and tantrums unfold.

The first episode of the 2014 Farmers Apprentice competition – a web TV series, which aims to find the UK’s brightest farming talent, will hit the screens of viewers from next week.

It follows the journey of the 10 finalists, who embarked on a week-long bootcamp earlier this summer, in a bid to win £10,000. The first episode will be aired on Tuesday 21 October.

This year’s crop of finalists were put through their paces in a series of five-day farm challenges at Easton and Otley College in July. All the tasks they faced reflected real life aspects of running a modern farming business, from setting up a sub-soiler and getting cows ready for showing, to negotiating wheat prices and putting together a business plan.

And while some of the contestants have farming running through their blood, not all have been born and reared on a farm. There’s no doubt however, all 10 finalists have got a thirst to work and succeed in this diverse industry and who knows, we may have even discovered the next NFU president or future Farmers Weekly award winner in our line-up.

The apprentices every move will be under the watchful eye of the judging panel, but at the end it all boils down to the judges picking one winner who will walk away with a whopping £10,000. This year the judging panel consists of Farmers Weekly’s editorial director Jane King; Lowther Estates director of farming, Richard Price and Will Gemmill, head of farming at Strutt and Parker.

Commenting on this year’s finalists, Ms King said: “We are very excited about this year’s series, as the 10 finalists really showcase just how dynamic and innovative people in this industry are and we need more people like this.

“When we launched the Farmers Apprentice two years ago, the aim was to showcase the range of skills and careers that exist in agriculture and what it takes to be a modern day farmer. We hope that this series will continue to build on that and open the public’s eyes to the dynamism of this fabulous industry,” she said.

Farmers Apprentice 2014 promises a unique examination of what it takes to succeed in farming- heads, hands and heart in equal measure. So be sure not to miss the laughter, tears, tension, and relationships unfold in this year’s series by tuning in on Tuesday to watch the first episode

On Tuesday 21 October from 10am, Episode 1 of the six-part series will be broadcast online

The remaining five episodes will be broadcast on the same day, at the same time every week and will be available to watch on demand thereafter. So why not watch it in your tea break, lunch break, when the kids come home from school or as a family in the evening.

For those that miss any, the episodes will be available to watch on demand after they are released.