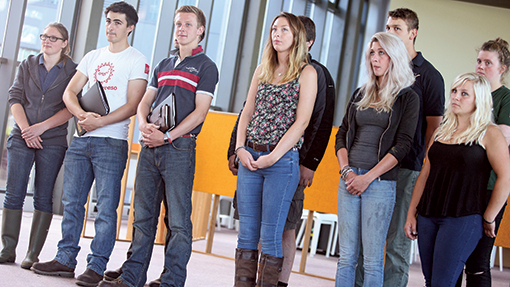 The second series of the Farmers Apprentice, a web TV show searching for the UK’s brightest farming talent, is available to watch now.

The six-part series follows 10 finalists who attended a week-long bootcamp at Easton & Otley College earlier this summer in an attempt to win £10,000. The contest showcases what it takes to be a modern farmer and the range of skills and careers in agriculture.

This year the 10 apprentices performed under the watchful eye of three judges – Jane King, editor of Farmers Weekly, Richard Price, director of farming for Lowther Estates, Cumbria, and Will Gemmill, national head of farming at Strutt & Parker.

The first episode aired on Tuesday (21 October) and saw the 10 apprentices go head to head in a boys versus girls task. The challenge was to design an online tool or smartphone app for farmers, that could revolutionise businesses and then pitch their ideas to the three judges, Dragons’ Denstyle.

The boys adopted a serious tone as they set to work on their idea. They certainly weren’t short of suggestions – dreaming up apps to help farmers buy and sell surplus produce, a market forecaster app and a tool to help farmers fix machines.

Over in the girls’ camp it couldn’t be more different. While a few ideas were floated they were quick to settle on an app advertising relief work. But did they research well enough and consider competitor options? Find out which team pulled it out the bag by watching the episode now at www.farmersapprentice.co.uk.