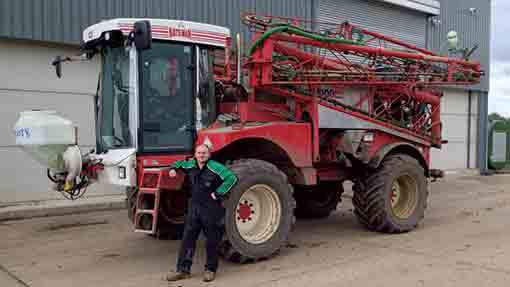 Tom Mack is an apprentice with Farmcare a 18,000–acre lowland farming organisation, which works with farming contractors across the UK to grow arable crops and vegetables for the food service, retail and trade sectors.

19-year-old Tom works at the Coldham Estate near Wisbech in Cambridgeshire and first caught the farming bug helping out a school friend whose family had cattle.

“We’d also done a bricklaying course and I wondered about going down that route – but I chose to take a risk and go into farming. I’ve never looked back. It’s a fantastic career.”

What the job involves

Tom did a one-year level two agricultural course at The College of West Anglia after he left school at 16, then applied for the apprenticeship scheme. This summer was his third harvest at Coldham.

The tasks are varied – everything from servicing machinery and equipment in the workshop and helping out with corn carting to maintaining drains and harvesting onions. “In agriculture, you’re doing something different every day.”

The highlight of Tom Mack’s job so far has been getting on the Bateman R35 self-propelled sprayer. It is an important task and a big, expensive bit of kit. “I was given lot of responsibility,” he says.

As well as the buzz from the big kit, Tom also enjoys working outdoors in the countryside, among all the wildlife.

In tandem with the job, the apprenticeship sees him do four, one-week residential courses a year at Reaseheath College in Cheshire. “I’m at an early stage in my career so I want to keep learning,” he says.

To succeed in agriculture, he reckons you need to be practical, but also have computer skills and get qualifications under your belt. Among the ones he’s already notched up are his PA1, PA2, PA6, plus forklift, telehandler and chainsaw tests.

“You also have to be a patient person because there are always times when things go wrong – and you need to be able to stay calm.”

He advises anyone considering it as a career to get as much work experience as they can (he did some with Velcourt). “It’s so useful and allows you to get your foot in the door.

“Sometimes it’s a case of plucking up the courage and going to see managers. It’s important to present yourself in the right way. Stress how keen you are. Look enthusiastic, look professional. I took my CV and actually went to see people. I prefer the face-to-face approach than doing it via a phone call.”

Getting your CV spot-on is also vital – which means remembering to put the most important things at the top, he says.

“Plus, don’t forget to include your hobbies because if you like playing football or hockey, for example, it shows you’re a team player.

“Qualifications are obviously important and can play a big part, but in farming a lot also comes down to experience.”

In December, when Tom’s apprenticeship finishes he hopes to get a full-time position at Coldham, perhaps subsequently moving up to a foreman or even assistant manager’s role. “At the moment I absolutely love what I do.

“You’ve got to be willing to do long hours at certain times of the year, but it’s a great job and Farmcare have been brilliant.”