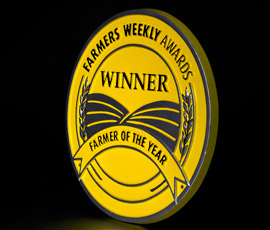 Our three Beef Farmer of the Year finalists demonstrate how focusing on maternal genetics, grassland management and cost of production can boost performance and profitability. 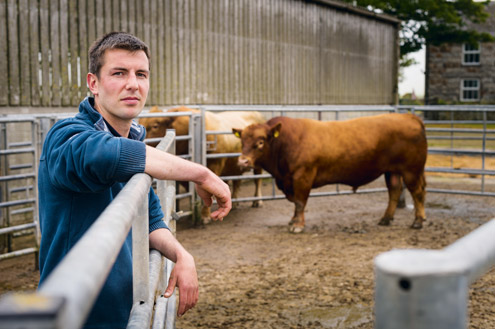 The beef enterprise at Crugeran Farm is geared towards sustainable suckler production. For this reason alone Harri Parry is focused on maternal production values as a means of driving cow efficiency and profitability.

Traditionally the Parry family ran a herd of 200 Limousin cross Holstein cows, which were put to a high-ranking Charolais bull, but barren rates were too high and the calving period was slipping out of sync, says Harri.

This resulted in Harri’s father Richard overhauling his breeding policy in 2001 in favour of ease of management. The Stabiliser was chosen as the “ideal” cow to suit their system.

“A lot of farmers think the bigger the cattle, the better, because they think they will command higher prices at market, but that doesn’t matter,” says Harri.

The business now comprises two herds – a 120-cow spring-calving herd and a 90-cow summer-calving herd, that are run over three units totaling 291ha.

Cows are calved outdoors, with fewer than 5% assisted, and calves are weaned at about six months of age. Males are left entire and are finished on a ration of silage, home-grown barley, oats and a protein supplement. The average growth rate is currently 1.8kg/day from weaning to slaughter. They are then sold at 12-14 months at a target of 310-360kg carcass weight, grading R4l or better, to produce bull beef for Tesco, while heifers are sold to Morrisons.

The whole herd is performance-recorded with quality breeding females and males within the top 5% of the calf crop sold through the Beef Improvement Group, which creates an added income stream.

Herd health is therefore fundamental and the herd is part of the SAC Premium Cattle Health scheme and is certified free of both BVD and Johne’s disease. Cows are also vaccinated for IBR and leptospirosis.

Since returning to the home farm after a 10-month stint working on a beef and sheep farm in New Zealand in 2005, Harri has focused his efforts on grassland production and has been instrumental in advancing the genetics of both the sheep flock and cattle herd.

Harri has purchased embryos from some of the best bloodlines in the USA and is using embryo transfer and AI to speed up herd genetic gain.

Currently seven bulls from the farm are taking part in net feed efficiency trials, which Harri hopes will drive down production costs even further.

One of these is Harri’s current stock bull Crugeran Llewelyn, which is in the top 1% of the breed for maternal production value, beef value and calving ease and his semen is currently being marketed through breeding company Cogent.

With surrounding dairy farms making it difficult to compete for land, and having signed up to the agri-environmental scheme Glastir, ever more precedence is being placed on grassland management and grazing.

The family has also diversified into holiday cottages and has put up a 55kW wind turbine, which generates electricity for the machinery shed and workshop.

In the next 10 years Harri says he wants to increase efficiency and profits by reducing the cow size to under 600kg.

“At the moment our cows weigh over 650kg with medium to large frames due to grading up. Smaller cows will hopefully grow faster and achieve their final weight quicker, so I can keep more cows and yield more meat per acre,” he says. 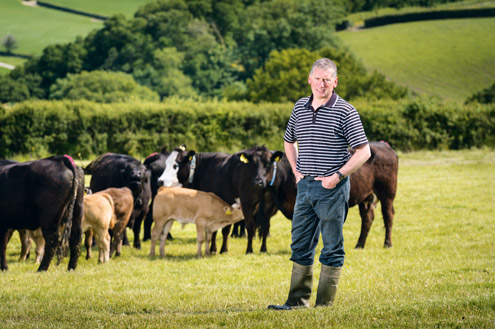 The beef enterprise at Lan Farm is one that epitomises simplicity. Since becoming organically certified more than a decade ago, efforts have been focused on achieving maximum output from a low-cost, low-input system.

“The first year in organic was challenging,” admits Phil Jones, but he says it has changed his mindset for the better.

At the heart of this low-input system is a herd of 100 Welsh Black x Limousin block-calving suckler cows. Most cows are served to high-index Charolais bulls, with a strong focus on 400-day growth rates and calving ease to maximise hybrid vigour.

Cows calve outdoors in April and May – which is central to ease of management, allowing Phil to manage the herd on his own and reduce labour costs.

The herd is housed in October in rubber-matted cubicles to provide high levels of cow comfort and reduce bedding costs. The cows are fed on ad-lib grass silage, while the calves have access to a mix of red clover silage and straw, with the protein content of red clover this year analysing at 20% and an ME of 12.

Calves are weaned at nine months, with some sold straight off the cow, and the rest are moved in to slatted housing. One of the key drivers of profitability of a successful suckler herd is its ability to produce one calf out of each cow every year. At Lan Farm rearing rates are averaging 92%.

The remaining stores are then sold between nine to 12 months of age, weighing about 340kg and they attract repeat buyers at an average of about £800/head.

Intent on reducing concentrate costs, Phil recognises the need for high-quality, high-yielding silage. As he is restricted from using artificial fertiliser under the organic scheme, soil testing has become a fundamental tool to ensure manure is being directed appropriately to achieve optimum P and K levels, alongside nitrogen-fixing clovers to support high-yielding crops.

“Output price can only be influenced by doing the best job of matching a customer’s requirements, and while sale price can’t be controlled, input costs can be focused to improve margins,” he says.

Following a BVD outbreak three years ago Phil has changed his replacement policy.

Previously he sourced his replacements from the local market, but instead he now operates a closed herd. Precedence has been placed on breeding his own replacements, with predominantly Welsh Black cows currently being AI’d with Limousin sexed semen, while bulling heifers are served to a black, polled Limousin bull.

These bulls are selected based on EBVs, with maternal merits for milk and daughter calving ease.

In order to improve the performance and productivity of his suckler herd close attention to detail has been paid to fertility.

Calving had slipped from being a traditional spring-calving herd to year-round calving. But over the past four years, great strides have been taken to rectify this, with calving index improving from 409 days four years ago to 377 days.

This compares to Hybu Cig Cymru’s average of 431 days. This has been achieved through rigorous semen testing, strict culling and by embracing technology, with Phil using heat detection collars to accurately detect cows bulling.

Being part of the SAC Premium Cattle Health Scheme, the whole herd is vaccinated for BVD and pneumonia and Phil uses a tag-and-test system to test for BVD in newborn calves.

At a cost of 80p more than a standard tag, Phil says it’s a no-brainer. “Once you have a good health plan everything else falls in to place,” he says.

As a result of health and housing improvements, total medicine costs have been reduced by 70% during the past three years.

Lan Farm is a demonstration farm for Farming Connect and Hybu Cig Cymru.

In the future Phil wants to sell surplus breeding heifers to create an new income stream, which will help create a sustainable beef business fit for the next generation. 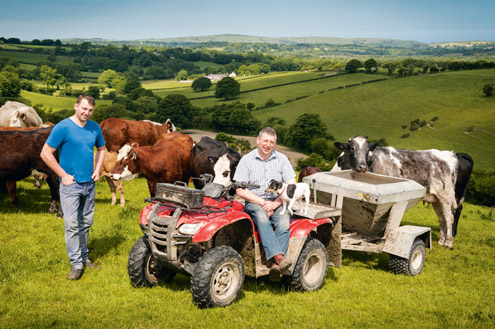 For brothers Alec and James Cowan, having to take on a mortgage aged just 21 and 29 in order to buy back their farm after their grandfather died without a will, has sharply focused them on the profitability of their enterprise.

In an attempt to drive cow efficiency and drill down costs, the pair swapped their traditional suckler system of Limousin cross Friesians for a three-way cross-breeding programme four years ago. And instead of selling store cattle they now produce finished bulls and breeding heifers.

It’s a risk that has paid dividends, with gross margins improving by more than 30% in recent years. And as input costs continue to rise, keeping an eye on outgoings is more critical than ever, they say.

“With any kind of business it’s all about controlling your costs and maximising your output,” explains James.

James and Alec are focused on genetics, using high-index bulls selected on maternal EBVs to create a three-way cross comprising Aberdeen Angus, Limousin and Hereford breeds to maximise hybrid vigour in their replacements.

They say key to driving efficiency is producing “designer” heifers that are small to medium-sized, milky and capable of calving at 24 months of age.

The first batch of heifers are served with Aberdeen Angus and Limousin sexed semen – from bulls in the top 10% for maternal EBVs such as milkiness and calving ease – at 15 months of age and 60% of mature bodyweight.

When it comes to bulling, a combination of a heifer MoT, tail paint and careful observation of heats is attributed to achieving an average conception rate to first service of 72%, with fewer than 3% of females requiring assistance at calving. First calvers are then put to a Hereford bull.

Cows in the main herd are put to a Charolais bull within the top 1% of the breed, with a careful focus on selecting “curve bender” bulls with low birthweights, but very high growth rates.

“Our first criteria when we’re looking for a Charolais bull is calving ease, but we also look for 400-day growth rates, because we want cattle that grow really quickly and make the grade,” adds James.

“A Charolais was introduced as the new terminal sire when we introduced the bull beef finishing system, to leave progeny capable of achieving faster growth rates within the same rearing system,” adds Alec.

The Cowan brothers have worked hard to maintain a compact calving period, with 98% of cows calving within 12 weeks. “Any failing to conceive after three cycles are culled,” explains Alec.

On average, 95% of calves are reared, with all progeny from the terminal sire bull sold as fat. This year, for the first time, heifers are also being finished rather than sold as stores.

In order to drive down rearing costs, as much home-grown forage and cereal is being used as possible. A total of 12ha of winter barley is grown, which has reduced bedding costs by 50%. Meanwhile, 6ha of red clover and Italian rye grass is grown, which is made into silage, while high-sugar grass leys have been introduced for grazing.

Bull calves are weaned at six months and are winter housed on straw and fed a TMR ration comprising 80% home-grown rolled barley, red clover silage and soya bean meal at a cost of £2.20 a day to achieve a daily liveweight gain of 1.9kg and a target carcass weight of 450kg at 15 months.

The farm’s carbon footprint is less than 14kg CO2/kg of beef produced, but the Cowans hope to reduce this further by improving finishing times.

Looking to the future they hope to expand the beef enterprise and seize any opportunity to buy more land.

“McDonald’s uses whole cuts of quality beef sourced from more than 16,000 quality-assured British and Irish farms each year, and we’re committed to working with these farmers to ensure they have a successful and sustainable future. We are therefore proud to once again support the Farmers Weekly Beef Farmer of the Year Award.”