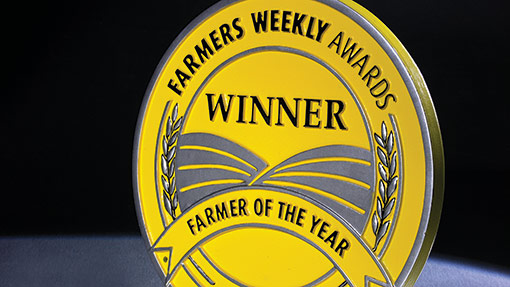 It’s an important milestone for the Farmers Weekly Awards, launched 10 years ago. This year’s 45 finalists join a growing gallery of men and women who run pioneering businesses and champion the farming industry.

1 Thomas Bradshaw, Essex Nuffield scholar Thomas is a progressive grower who is passionate about soils. He says, like other living organisms, soils breathe and require feed so cover crops are used extensively across the family partnership’s 1,600ha.

3 Poul Hovesen, Norfolk and Poland Poul’s management responsibilities extend over 5,500ha – two Norfolk estates and one in Poland. Producing high-yielding crops in a water-sensitive catchment area is a key focus.

4 Mervyn Thomas, Herefordshire A herd of 100 British Friesian-cross cows make up Mervyn’s impressive suckler system. His focus on deadweight gain has seen bull calves kill out at up to 66%.

5 Billy O’Kane, County Antrim Changing his farming philosophy has seen Billy make spectacular performance improvements in his herd of 145 Stabilisers. He consistently ranks in the top 10% of NI benchmarked beef farms and is a Dard monitor farm.

6 Simon Bainbridge, Northumberland Since going organic, Simon’s goal has been to run a simple but profitable system. High health status is a key focus in his herd of 130 Aberdeen Angus-cross Hereford cows and compact calving has improved efficiency.

7 Olly Neil, Suffolk Olly has built up an impressive business in 10 years specialising in forage harvesting and spreading services. He has also diversified to keep employees and machines busy at slacker times of year.

8 Robert Boole, Wiltshire Robert runs a specialised business providing agronomic advice to arable and dairy farmers as well as an application service. His fleet of self-propelled sprayers operates from a purpose-built storage and filling building.

9 Peter Gilbert-Butler, Suffolk Peter is a beet harvesting veteran with more than 30 years in the game. He now lifts 1,100ha of beet a year single-handedly, as well as running his own 200ha arable farm.

10 Robert Craig and Steve Brandon, Cumbria Robert and Steve manage 530 cows using a New Zealand approach in the Eden Valley, together with 149 bulling heifers and 101 heifer calves, as part of a joint venture.

11 Alex Robertson, Wigtownshire Alex manages a high-yielding 500-Holstein herd on a 263ha unit on the coast. Challenging conditions have led him to house cows year-round and four years ago he adopted zero-grazing.

12 Jonathan Wilkinson, Powys Managing 320 cows on his 155ha farm in mid-Wales, Jonathan has invested to double cow numbers and substantially grow the business over the past five years.

14 David and Helen Harrison, County Down David and Helen started selling vegetables to nearby shops and have gone on to build a business that encompasses an on-farm nursery, farm shop and restaurant.

16 David Coombes, Hampshire Having restructured the veterinary practice, value has been added to the business by offering more than just medicine. An integrated approach offers advice on livestock nutrition, animal health and genetics.

17 Gary Markham, Cambridgeshire A wide-ranging skill set offers a one-stop-shop for all business and financial advice. Planning for the future is a key part of the service provided, addressing the problem of succession  in agriculture.

18 Nerys Llewelyn Jones, Carmarthenshire A positive and passionate approach to offering farmers  legal advice has lead to an impressive, wide-reaching client base across Wales and parts of England in a short space of time.

19 Sally and Andrew Jackson, The Pink Pig Farm, Lincolnshire Good organisation and superb teamwork is fundamental to this diverse business, which employs 34 loyal staff across a mixed farm, a shop, restaurant, farm park and play bar.

20 Justin Scale, Capestone Organic, Pembrokeshire This organic and free-range chicken and turkey business has invested well, including a focus on team development, to place it at the forefront of the poultry sector. The 37 farm staff feature prominently in its strategy.

21 Robert Barnes, LE Barnes & Sons, Bedfordshire Delivering an exemplary service to customers through highly trained employees has been crucial to the growth of this contracting and farming operation, which farms 360ha of its own land and contract farms 1,200ha more.

22 Roger Summers, Devon Roger has been a key part of Michael Williams’ busy dairy farm since 1988, carrying out milking, silaging, mowing, cultivating, fertilising and many other essential operations.

24 Graham Glasper, Somerset Graham joined Mark Pope’s clay-land Staple Farm in 1988 and has helped make the move from plough-and-combination drill to minimum tillage over the past 10 years.

25 Keith Daly, Essex Everything must earn a premium in the complex business that Keith manages. He has increased flexibility and improved efficiency through meticulous planning.

27 Karl Rust, Nottinghamshire Karl has restructured machinery and equipment, promotes engagement of staff with what they produce and has a strong customer  focus. There’s time for industry involvement too.

Local Food Farmer of the Year

28 Ian and Lesley Buxton, North Yorkshire Starting with an ice cream van and a 32ha dairy farm, the Buxtons have developed an ice cream business with an impressive turnover and listings in regional retailers, cruise ships and local attractions.

29 Tom Bowles, Wiltshire Tom and his family turned their intensive pig business into a mixed farm supplying their own farm shop and butchery, with a strong focus on the environment and creating a community hub.

31 Robin Traquair, Midlothian Five years ago the Traquair family faced a stark challenge: adapt production or get out of pig farming. The innovative overhaul of the business has seen growth and a return to profit.

32 Gary Anderson, Co Tyrone Gary has taken a pioneering approach to technology and shows a willingness to open his business for research and trials. He is also involved in the pig industry beyond his farmgate.

33 Simon Watchorn, Norfolk Simon’s careful management of feed costs and strong focus on attention to detail and the use of data are enabling him to make a healthy profit from his outdoor pig herd.

34 David and Helen Brass, Cumbria Egg producers David and Helen have been on the expansion trail, building an impressive new packing centre and contracting more producers, but never losing sight of their strong environmental priorities.

37 Kevin and Julie Bateman, Devon First-generation farmers who are transforming the biodiversity of 216ha grazed by Devon sucklers and 700 ewes with careful soil management and wildlife habitat restoration.

39 Richard Clothier, Wyke Farms, Somerset The Clothier family have been farming and making cheese for more than 150 years. It claims to be the only “100% green cheddar brand”, with total energy self-sufficiency.

40 John Scott, Ross-shire John runs a flock of 1,200 cross-bred ewes and two flocks of Cheviot sheep in Tain. He also breeds pedigree NZ Suffolk and Texel rams and is a past Nuffield scholar.

41 Martin Greenfield, Warwickshire Martin has a flock of 1,000 Texel-cross Mule ewes at his farm near Atherstone. He has added value to his business by selling lambs at local farmers markets and direct to butchers.

42 John Harrison, Cumbria John is a shepherd at Lowther Estates and runs 5,100 Mule ewes. He has been integral in increasing output while reducing costs and has embraced EID to record performance.

44 Marc Jones, Powys A radical restructuring of the sheep flock to a successful Lleyn sheep enterprise and collaborative heifer rearing has turned around this 200ha family farm in mid-Wales.