From broad-acre vegetables, to top fruit and lavender, each of this year’s Specialist Crop Producer finalists represent an entirely different sector of the industry and all are equally as proud and brilliantly passionate British producers. Oli Hill reports.

The 2017 Specialist Crop Producer of the Year finalists are: 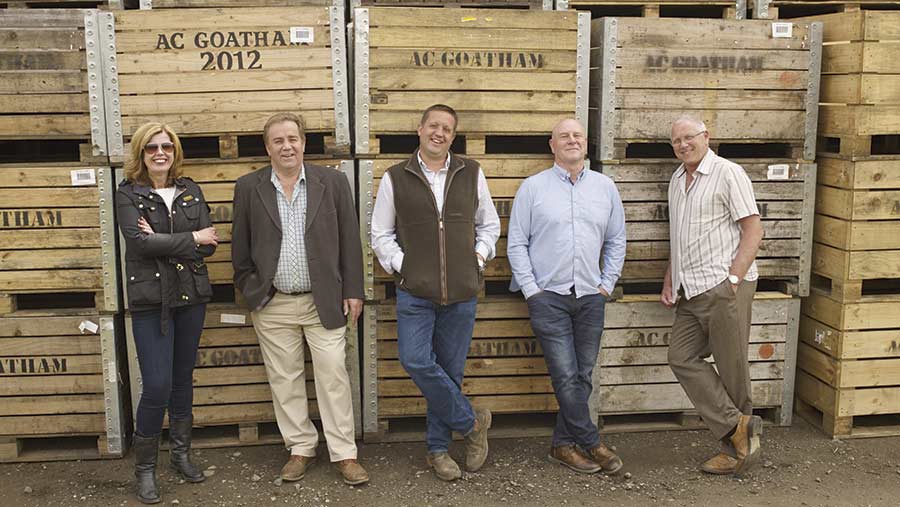 As AC Goatham celebrates its 70th year, this family business is leading the renaissance of British pear growing by investing millions to compete better with our European neighbours.

Reviving the fortunes of the British consumer’s favoured Conference pear variety is a key objective for this leading top fruit producer, which is why the business has undertaken the largest pear tree planting project in decades.

The company is also seeking to take on apples coming over from France, where harvest typically begins a few weeks ahead of the UK, by growing earlier-maturing varieties.

Commercial director Carol Ford says the company prides itself on having some of the most modern orchards in Britain.

“As a nation we’ve not invested in pear historically. We’ve used learnings from ways that top fruit is grown elsewhere in the world to improve yields and quality earlier on in the life of the tree.”

Most traditional pear orchards are ancient and inefficient, which is why the team at AC Goatham have employed modern growing techniques used by Dutch and Belgian growers.

Called the “double-V system”, the technique involves taking the four leading branches of a young pear tree and tying each of them to an angled cane in a “V” shape. This method has dramatically pushed up yields from its first cropping year in 2016.

Compared with the UK average yield of 17t/ha, new system yields are averaging about 25t/ha and are expected to rise to about 65-70t/ha once the trees reach maturity. This system also means the fruit is easier to pick, requires less handling and brings down production costs.

Identifying a big opportunity for “ripe and ready”, whereby pears are taken out of cold storage and allowed to warm and ripen ahead of being sent to supermarkets, has helped raise consumer interest and demand for pears because they can be eaten on the day of purchase.

Aside from increasing yields, the business is pushing to get to the stage where consumers will be able to buy British apples 12 months of the year.

In what could be an exciting UK first, the ambition is to grow enough fruit to supply British eating apples throughout the year.

The business has also been trialling a new apple variety and hopes are it can rival the earliness of the French apple harvest, which typically starts two or three weeks ahead of the UK crop.

This is an impressive and innovative fruit business, proudly investing in the future of British-grown apples and pears. The team’s enthusiasm for top fruit is infectious and there is a clear plan to take the business forward. 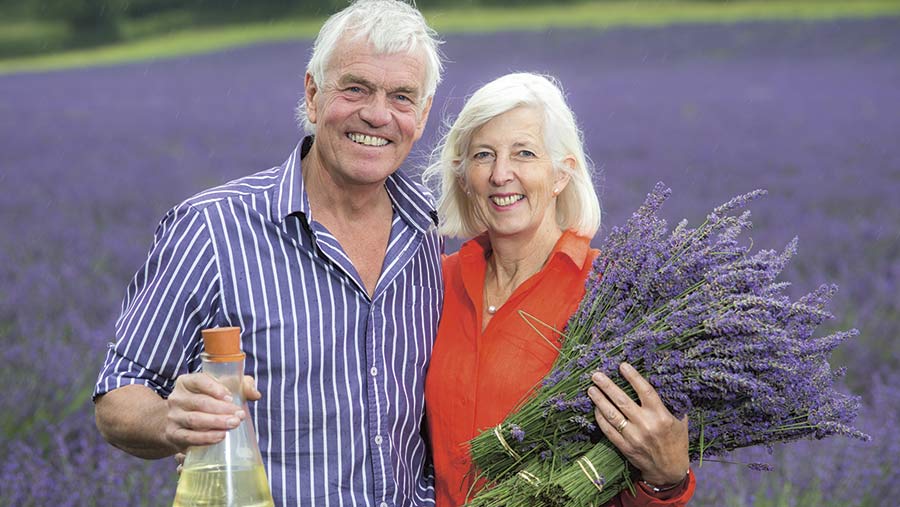 Originally growers of hops, William and Caroline Alexander began an exciting new chapter on the family farm in the late-1990s, growing lavender for an essential oils enterprise as part of a small local grower co-operative.

This is Britain’s largest lavender farm, with oils distilled on farm marketed to French perfumery houses while also used many UK high street products and Castle Farm’s own-label of toiletries.

Nestled in the Darent Valley of north Kent, the warm climate and chalky soils are well suited to growing this specialist crop of Mediterranean origin.

“The hop market is very volatile and broadly speaking hops are only used for beer and you often get over or underproduction,” says Mr Alexander.

Knowing very little about lavender as a crop, he went on a fact-finding mission to Provence, one of France’s biggest lavender-growing regions to see what he and other growers in the co-operative could learn.

With a distinct lack of UK research on lavender production, the Alexanders carried out their own trials work to identify the most appropriate varieties to grow, understand the crop’s unique agronomic challenges and discover the best way of harvesting the crop.

Costing about £10,000/ha to establish a lavender crop that typically lasts for about 15 years, the Alexanders naturally wanted to grow high-yielding varieties which produce aroma-quality oil.

A 15-year variety breeding programme looking at oil quality as well as yield has been supported by on-farm trials and will result in field-scale commercial plantings at Castle Farm in the next few years.

While oil remains the primary reason for growing lavender – these specialist crop producers take full advantage of the attractive sights and smells of their bright purple fields.

Each summer thousands of farm visitors pay to go on tours of the lavender fields, have picnics, use the crop as a backdrop for amateur and professional photoshoots and even get a massage.

While hops are no longer grown for beer, they are sold for decorative purposes – some are destined to be used in films and TV thrillers such as Game of Thrones.

The farm business has enjoyed years of growth but the Alexanders are keen to remain in control of this highly successful diversification.

To this end, they plan to continue to grow organically and are against any development to a scale that would detrimental to the local landscape.

The Alexander family has built up an impressive expertise in growing Kentish lavender from little prior knowledge of the crop. They are pioneering development of new varieties tailored to the British climate and are highly passionate about their products. 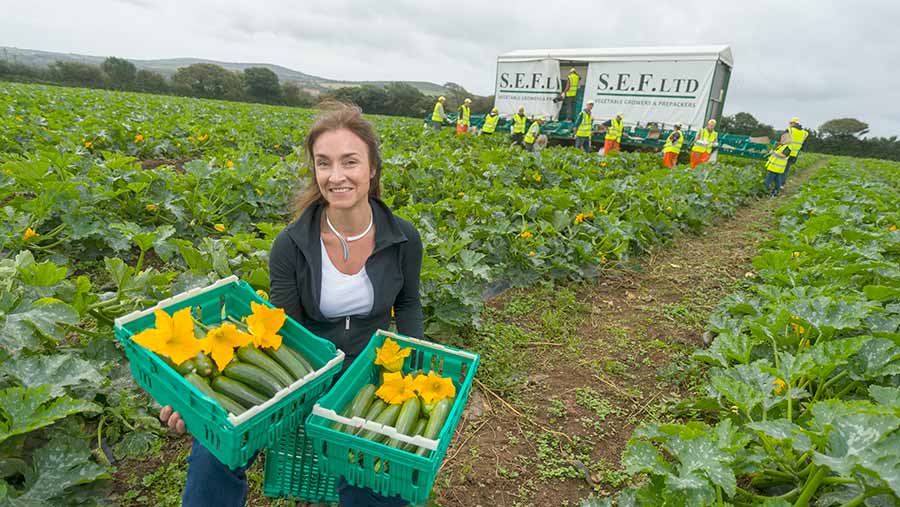 Having enjoyed years of rapid growth, today this green veg giant supplies big names such as Tesco with 70% of its courgettes and 60% of Sainsbury’s spring greens.

A drive to improve efficiency in the past five years has seen waste cut by 30-70% depending on the crop, thanks to better land selection, improved scheduling and a greater understanding of crop growth curves and market demands.

All tractors run on GPS for great accuracy of cultivations and input applications, while self-propelled rigs for harvesting broccoli and cauliflower have helped cut crop damage during the initial harvest, leading to an 11% yield uplift on subsequent cuts.

With a workforce largely made up of men and women from Eastern European countries such as Lithuania, Bulgaria and Poland, having enough people power has long been a challenge, but now Brexit and an end to freedom of movement threatens to throw into question how produce will be picked and processed in years to come.

Rather than grumble about the uncertainty that lies ahead, Greville and Jane have already upped their game in attracting overseas workers by revamping the company website and harnessing the immense power of social media.

One of the key challenges with rotationally renting the majority of the area farmed is that Southern England Farms don’t keep the land on long enough to be able to have much of a positive effect on soils and the environment.

To help with this, they are pushing for more long-term contracts of about five years to allow for better soil management plan to be put in place.

While they feel the business has hit its limit now in terms of acreage, the business will continue to diversify to meet consumer demands and spread risk through the year.

That’s why they have plans to diversify into egg production, looking at introducing 112,000 free-range hens.

The team believe these layers would offer synergies with the vegetable side of the business, applying chicken manure on land for added soil fertility benefits. Growing cereals for chicken feed acts as a rotational crop, which helps with taking on longer-term land rentals.

Proudly Cornish, the business has flourished to become one of Britain’s biggest vegetable producers. Significant efforts have been made to reduce in-field waste and to adopt longer-term strategies to have more of a positive impact on vegetable-growing land.

“Arysta LifeScience provides modern, progressive solutions for sustained crop production through a unique portfolio of seed treatment, crop protection and biosolutions products. As a leading supplier to UK agriculture, we are delighted to be sponsoring the Specialist Crop Producer of the Year award”