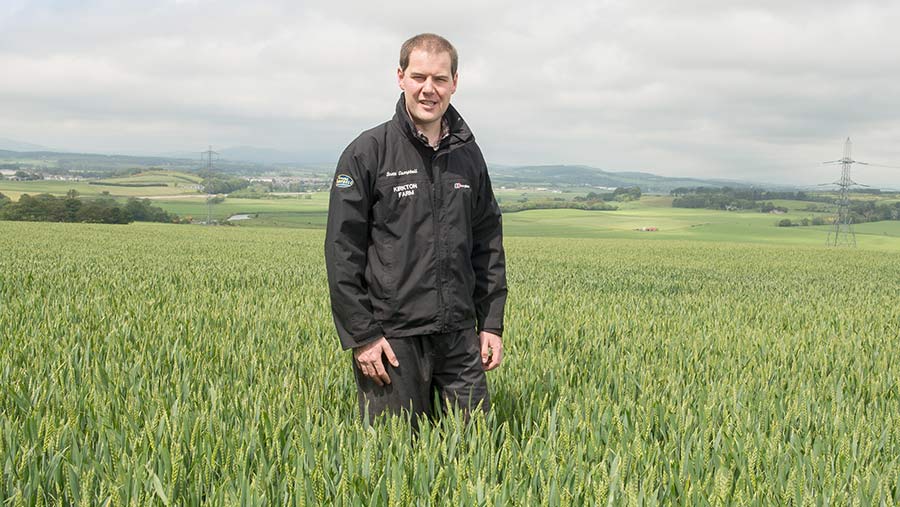 Scott Campbell is the 2019 Farmers Weekly Arable Farmer of the Year.

Despite a challenging climate and thin, stony soils, Scott is producing wheat for less than £85/t – a figure growers south of the border with far easier soils and climes would be envious of.

Scott is the fourth generation of the Campbell family to take the arable reins and, over the past 12 years, he has transformed the family business by cutting costs and raising yields.

He has also single-handedly nursed the arable enterprise back into health, ready for life after Brexit, in order to be profitable without the need for subsidy payments. 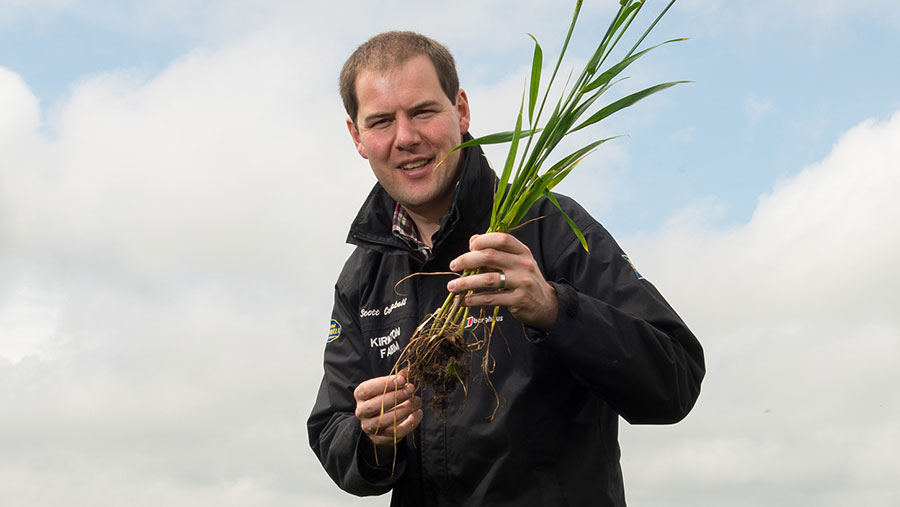 Back in 2007, costs were high. Establishment was based on ploughing and a traditional one-pass power harrow, and it was costly to run.

Soil health was also poor, with some fields unsuitable for winter cropping, and others could not be cropped at all. Narrow machinery and stones in fields resulted in high labour requirements.

The brome and annual meadow grass problem meant Scott was unable to grow seed crops, missing out on valuable premiums. Lack of storage also limited marketing opportunities, as he was only able to grow one malting barley variety.

And most importantly, yields were suffering because of nutrient deficiencies and wheel markings from rollers.

Changes
Scott embarked on overhauling the rotation, which has been widened to have OSR one year in five, although some fields have an even longer rotation – one year in nine – to control sclerotinia.

Scott also feeds soil with organic matter from straw-for-muck arrangements with local livestock farmers, who he works closely with.

He has moved to less-intensive cultivations by adopting a Horsch disc drill, which has halved fuel use, and even deploys intermittent drilling in tramlines to reduce soil erosion.

Finally, Scott has a policy of growing three different varieties of wheat and barley to spread risk, and he even tailors varieties to field aspect, with Lili wheat grown in north-facing fields as it is suitable for early drilling.

Achievements
Winter barley is his most improved crop – increasing by 1.5t/ha over the past four years – with a three-year average of 10.13t/ha.

The switch to liquid fertiliser, which enables applications right to the edge of the crop, has increased headland yields by 30%, and using slurry on OSR has reduced fertiliser costs by £28/ha. Taking a variable approach to lime generated a greater saving of £59/ha.

Scott has made big savings with tractor replacement by using Euroauctions in Leeds. The savings on one tractor alone paid for autosteer, and the combination of less-intensive cultivations and the new grain dryer saved 10,000 litres of diesel last year.

Looking to the future, Scott aims to further reduce his wheat growing costs to £80/t.

Links with Scotland’s Rural College have also seen Scott hosting grass trials, as well as the wheat challenge – a competition for students to grow the highest-yielding plot.

He enjoys mentoring the next generation and, judging by his achievements, they are learning by good example.

“Scott demonstrated that he has a very successful arable business, farming in challenging condition. He is ready to take on whatever lays ahead, while also striving to benefit the environment and local community.”
Andrew Blazey, independent crop consultant