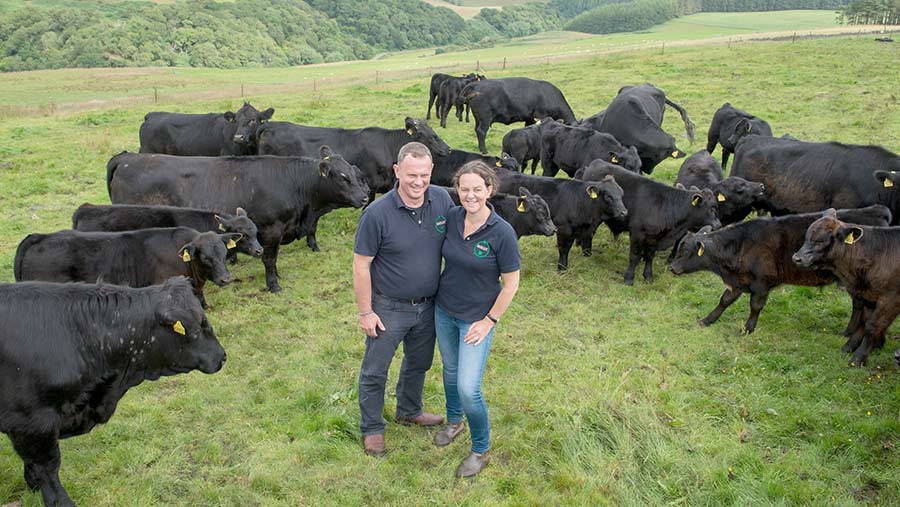 Charley and Andrea Walker are the 2019 Grassland Farmers of the year.

Testament to the success of Charley and Andrea’s organic beef and sheep enterprise is the fact they are entirely self-sufficient in feed.

Taking inspiration from the Kiwis following a stint working in New Zealand, they have brought the “simplistic” mentality of red meat production back to Scotland, creating a winning formula on their 254ha tenancy in the Scottish Borders. 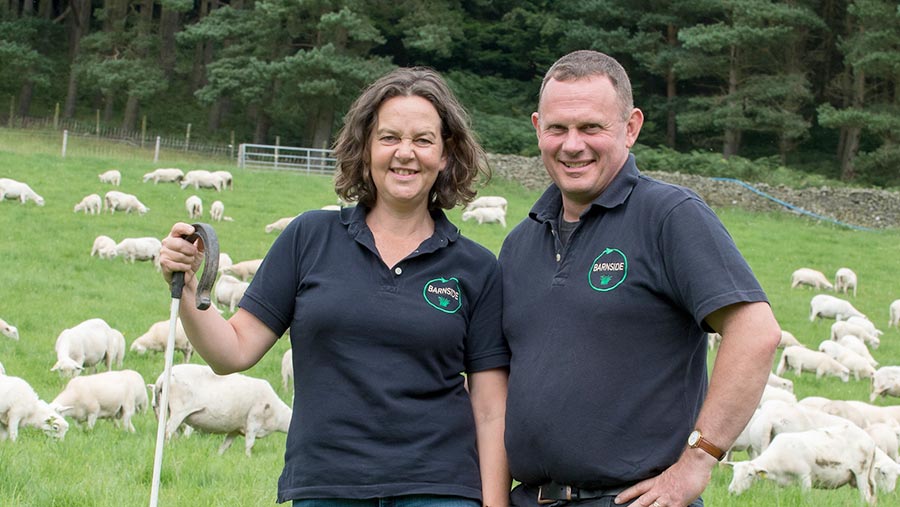 Good fertility is the linchpin of their low-input system, with Welsh Black cross Angus cows calving in just six weeks from April. Easycare ewes are bred pure and lamb for three weeks from mid-April.

Eliminating the requirement for housing helped them to create a low-cost system with requiring less labour that works in harmony with the environment.

Environment
What really makes Charley and Andrea stand head and shoulders above their contemporaries is their passion and dedication to showcase to the public the environmental benefits sustainable red meat production in the uplands has to offer.

They host regular farm visits for schoolchildren and an annual weekend residential for an environmentally focused youth group from Edinburgh called The Green Team, to give them hands-on experience of farming activities and conservation.

They are testament to the fact that environmental stewardship doesn’t have to be at the expense of production.

They have planted 3km of hedgerows to create a network of wildlife corridors bustling with birds.

Hedges are only cut every three years and they have fenced off wetter areas of the farm for wading birds and dug shallow ponds to create habitats for feeding chicks.

They monitor farm birds through their involvement with the RSPB Volunteer and Farmer Alliance Programme and have fenced off river ground to prevent water contamination.

Achievements
This complements their drive to increase production sustainably and cost-effectively by using grass and forage.

The switch from set-stocking five years ago has seen production almost double to 405kg DM/ha and profits lift exponentially.

More recently, they plucked up the courage to give holistic grazing a go and are hoping it will act as an “armour for soil”, building organic matter and, in turn, sequestering tonnes of carbon.

They hope this will help negate the unfair press suffered by the farming community.

Charley says: “I really want to help tell the story about carbon and methane and all the things we are getting hammered for as an industry.

“But most of all, I want to enjoy farming and leave a legacy – not necessarily for my kids – to hand over the land better than we found it to whoever comes along next.”

I was impressed with the clarity of their business. They had identified a simple, profitable, low-cost farming template, built around grass, forage and good grassland and soil management.

The 2019 Grassland Manager of the Year is sponsored by Germinal