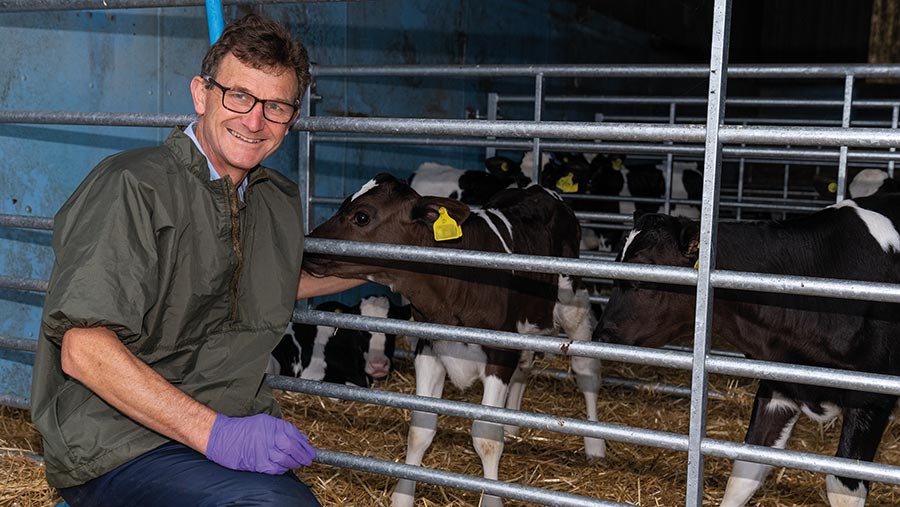 Julian Allen is the Farmers Weekly Livestock Adviser of the Year after helping one large Dorset dairy farm cut its antibiotic use by two-thirds over eight years.

As a senior dairy-focused vet, Julian has also tackled the challenge of moving to a non-soya diet for the farm’s milking herd demanded by one leading retailer and rely on home-grown protein crops.

Mr Allen’s advice has been key in achieving the fall in antibiotic use on the farm, and also across his vet practice covering north Dorset, south Somerset and parts of Wiltshire.

“Antibiotic use across the practice has halved in five years across dry cows, milkers and young stock,” he says.

The progress in reducing antibiotics use in the vet practice has picked up in recent years due to the increased use of sand in cow cubicles and the general improvement in milking equipment.

Equally impressive is the switch over to using rapemeal on the Dorset farm started five years ago with little difference in milk yields, showing that the high-yielding dairy cow can thrive without soya.

He has dealt with the “holy trinity“ of health challenges of mastitis, lameness and fertility on this large 420-strong Holstein dairy herd at Hanford Farms, near Blandford Forum.

Mastitis has been reduced by a move to more hygienic sand in the cow cubicles rather the rubber mats, and also moving dry cows to cubicles from straw yards.

Preventing lameness is focused on regular foot-baths and foot-trimming, and Julian has helped to set up mobility scoring to identify problem lame cows.

Fertility starts with improving the diet of dry cows, fine tuning the diet by edging up protein, nudging down energy levels and giving the correct minerals.

The result has been a calving index brought down to a mean average of 395 days from more than 400 days a few years ago.

The dietary transition from soya to rapemeal for feeding the milking herd has been achieved without any detrimental yield effect.

The move to domestic-grown rapemeal from imported genetically modified soya, increasingly grown in sensitive areas such as the Amazon basin, is being encouraged by a desire to use more home-grown protein crops.

Rapemeal is not as rich in protein as soya, so 4kg of rapemeal is equivalent to 2.25kg of soya, meaning there has been a rise in concentrate use per litre of milk.

The antibiotics reduction is across all stock, virtually eliminating their use for pneumonia in young stock by better housing and ventilation.

Julian believes mastitis often originates from the dry cow environment, so sand cubicles and other actions have seen mastitis rates fall to 21 cases per 100 cows/year.

Farm manager Martin Monckton has worked with Julian for eight years at Hanford Farms, near Blandford Forum, and has known him for 20 years.

“Julian has helped us reduce antibiotic use by two-thirds on this farm in eight years,” says Martin.

Now, 87% of cows don’t need antibiotics when drying off.

Martin adds that Julian has help redesign ventilation and housing for the farm’s youngstock, while mobility scoring has helped herd health.

Furthermore, Julian’s help and advice was essential in the move away from soya in the diet of the milking herd with no fall in yield.

A word from the independent judge

“Julian is keen to go the extra mile as he is so invested in his clients’ businesses and their success. He has a very consultative approach and sees the constraints on a business and is able to work very well within those.”