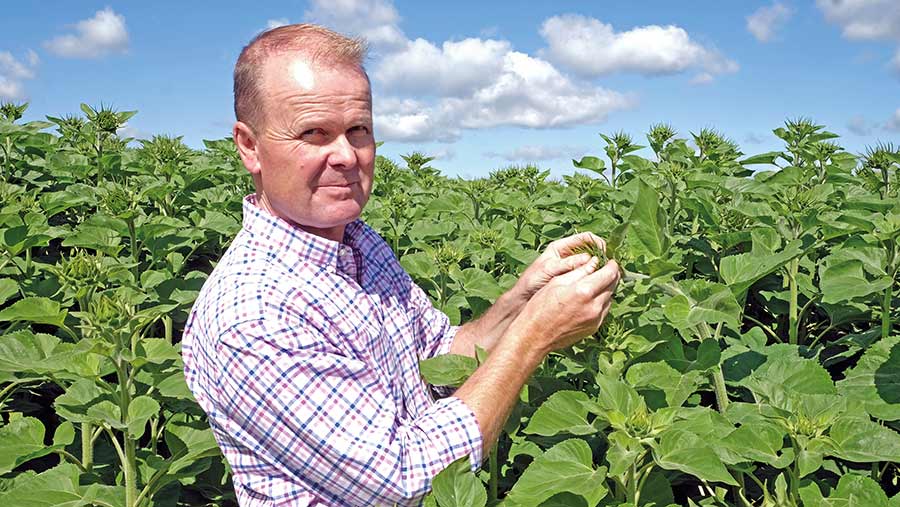 His huge commitment shows in both the margins and technical performance of the four holdings making up Troston Farms.

Strong financial and risk management skills mark him out, with an average gross margin of £943/ha across 1,542ha, and most of the cropping securing added value.

Further added value for the 40ha of sunflowers currently grown for supplementary feeding mixes is being explored this year by testing the crop for oil extraction or selling the hulled kernels.

Change has been a feature of Edward’s six years in the job, with several additions of significant acreages requiring meticulous planning and resource management.

The aim is for profit without government support and, while this large arable business may expand further, Edward acknowledges that it could look very different in future, with up to 25% of the land possibly not cropped.

He is taking part in the Sustainable Farming Incentive pilot, has two Mid Tier Countryside Stewardship schemes on 80ha and is part of a local cluster group assessing the potential for large areas of land to create habitats for key species.

The three full-time farm staff have seen change too, with a move from salary to wage and overtime, and their inclusion in discussion of business challenges and objectives, breakfast meetings off farm and involvement in the choice of major machinery purchases.

Edward is involved with the Suffolk Show and the Suffolk Farm School Fair and has close links with the local primary school and with a school in Wales for Farmertime.

Congratulations to Edward on winning this year’s Farmer of the Year award. The focus on improving soil health and structure, combined with on-farm trials, demonstrates a pragmatic approach to improving farm profitability sustainably while managing risk. Agrovista wishes the whole team at Troston Farms every continued success.