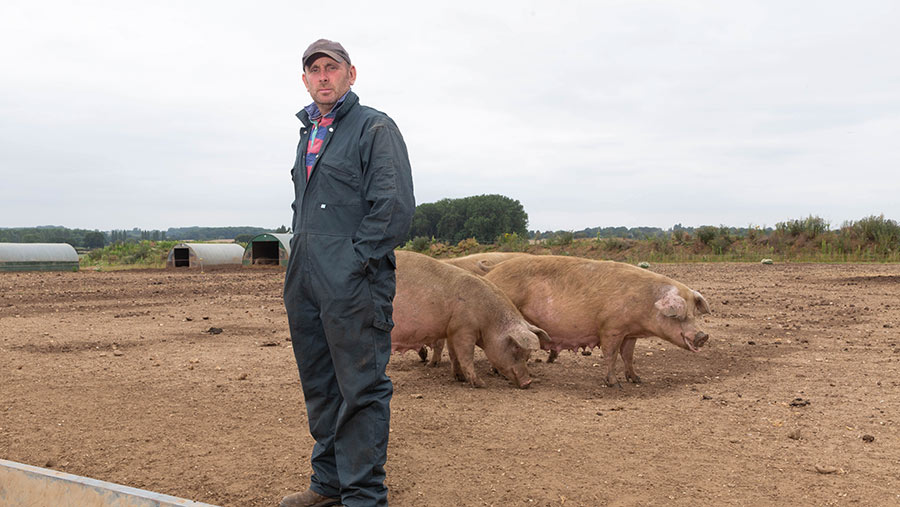 Richard Mellor is a determined man. After years of managing pigs on rented arable land with limited control, he finally managed to secure a county council tenanted farm seven years ago.

Now he can decide how the land is managed, and he has placed self-sufficiency at the centre of his business plan.

The two go hand-in-hand, with straw and muck from the pigs fertilising the arable land, and the arable business providing a direct supply of straw for bedding, removing a major variable cost.

The pigs are rotated every two years, which provides many benefits to the land and the crops that follow the pigs. The soil’s organic matter has increased and its structure has improved, resulting in increased crop yields.

Richard is leading the way when it comes to trialling new ideas and concepts. He was the first farm to try five-week weaning – brought to him by BQP – which is designed to promote heavier and healthier pigs at weaning.

This required a lot of labour input as well as expense, as he had to invest in more farrowing accommodation.

While Richard has little control over the genetics and feed he uses, with BQP driving those decisions, he is still very much in control in terms of the direction he wishes his business to move in.

He has invested in farrow feeders and long troughs across the farm, reducing feed wastage by about 8%.

Richard is keen on using figures to help drive his decisions. and is currently using Winpig to monitor performance and benchmark against other farms.

He also supplies BQP with his figures, allowing him to benchmark his cost of production and other key parameters.

Next year, he is looking to invest in electronic identification to make record keeping easier when he depopulates and repopulates the herd.

His attention to detail is clear, with the herd sitting in the top 10% of outdoor breeding herds when it comes to performance.

Staff is one of the biggest challenges Richard faces, but currently three of his four full-time staff members are family, including his wife, Charlotte, daughter, Chloe, and son, Jack.

This does not mean training is forgotten, however, with Chloe completing an apprenticeship and Jack just about to start.

Richard is supporting the environment by planting wildflower mixes around the farm. This year, he started working with Waitrose to plant 4ha (10 acres) of pollinator mixes to encourage bees and boost biodiversity.

He has also been accepted onto a Mid Tier Stewardship scheme.

“Richard is a driven operator who has been laying the foundations to create a productive and efficient unit. Not only is he striving for the best on his farm, but he is also trialling concepts that could help the wider pig industry.”
Zoe Davies, chief executive of the National Pig Association

Read about the other finalists