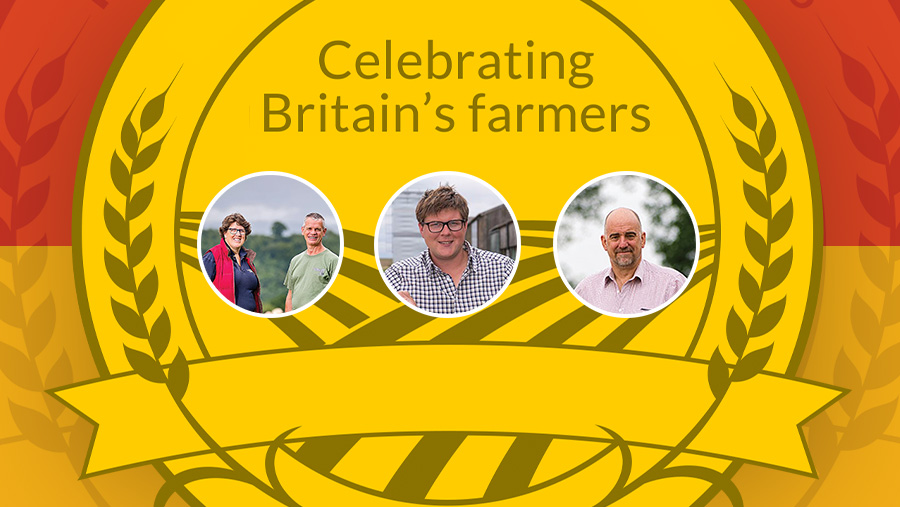 Farming is more than just a business. Farmers are caretakers of the land and always aim to leave it in a better state than they found it.

This year, farmers who have built consideration of the environment into their decision-making and set ambitious goals have been singled out for our Environmental Champion of the Year shortlist.

The winner of this award, chosen from the finalists in the other Awards categories, is the farmer judged to have made the most positive impact on the wider environment and the sustainability of their farming activities.

The judging panel considered the following points when selecting the finalists:

Arable Farmer of the Year finalist
Tim Parton has always been interested in working with nature, and his focus on improving soil health and using beneficials has led to an increase in key bird species. And the whole farm ecosystem is now working.

Every decision Tim makes is focused on getting his soils working again and promoting soil biology. He also aims to reduce leaching by feeding the soil biology, applying fertiliser with carbon in the form of molasses. 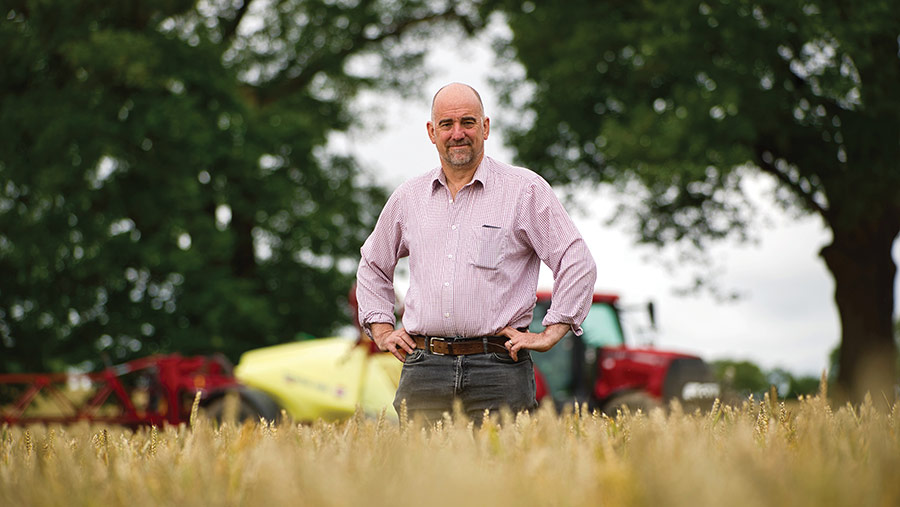 Since moving to conservation agriculture, worm numbers have increased to 20 per square blade and soils are healthier. Soil organic matter has increased by 0.2% a year and soils coped in last winter’s wet conditions with no water running off the farm and drains now run clear.

Bird counts from a local ringing group show wildlife has returned to the farm in great numbers. New bird species are now being seen, including breeding barn owls and kestrels.

Tim has also introduced wildlife margins to help promote beneficial insects. Numbers of these predators are at a level that has enabled him to avoid use of insecticides for the past five years.

He has also reduced other pesticide inputs. He no longer uses autumn pre-emergence herbicides and he has slashed fertiliser use by 40kg/ha through through the novel use of nitrogen-fixing bacteria and microbes that release phosphorus from the soil.

Tim is passionate about biological farming and has gained an impressive knowledge of soil biology. This focus and his strong environmental credentials are leading to increased wildlife.

Mixed Farmer of the Year finalists
Herefordshire farmers Esther and Henry Rudge have a strong focus on environmental enhancement on their 170ha farm.

The family have planted 4ha of woodland, 1,700m of hedgerows and repaired a further 1,400m to promote wildlife populations and reduce flooding risk, as well as planting 3ha of floral margins to reduce run-off. 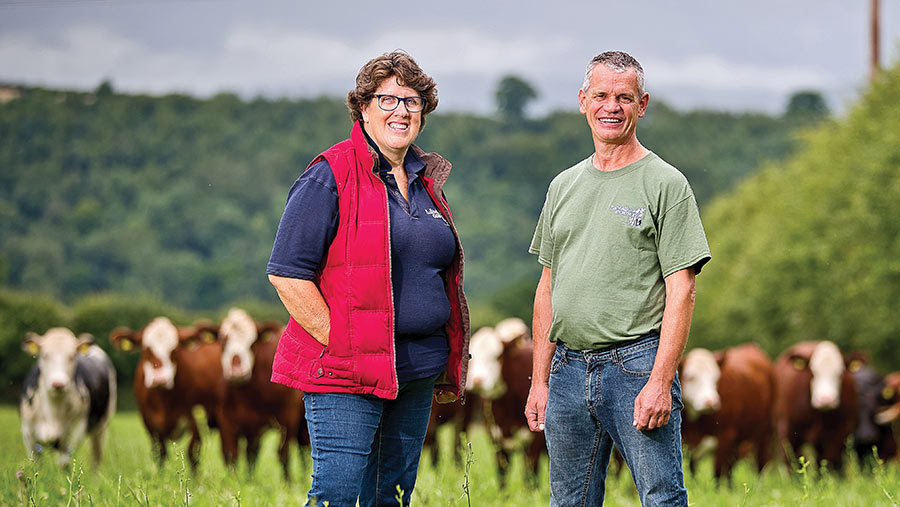 The team have always looked for innovations to help sustain their business both financially and environmentally, embracing renewable energy by being early adopters of solar and establishing an 80kW anaerobic digestion plant.

The sustainable closed-loop plant has benefited the farm; promoting soil health through the application of digestate has saved £15,000 in fertiliser costs, as well as increasing crop yields.

A wood-fired kiln dries wood from the farm, enabling 45cu m of sustainable firewood to be sold each year. The family are now considering using excess heat from the kiln to diversify into a hydroponics enterprise.

Another priority for the Rudges is promoting beneficial insect populations to reduce reliance on chemical pesticides. The family maintains taller grass between fruit trees in their orchard to encourage insects and manage pests.

The Rudges value the environment in which they farm. They work hard to enhance their natural surroundings through a range of methods, which allows them to run a sustainable and profitable business.

Beef Farmer of the Year finalist
James Waight works closely with ecologists employed by his landlord, the Ministry of Defence, to fulfil its objectives of creating sympathetic habitats for rare plants and wildlife that thrive on his rare chalk grassland.

The organic beef producer farms on part of the Army’s training range on the Wiltshire plains, one of the largest remaining areas of pasture of its type that has never been ploughed or cultivated. 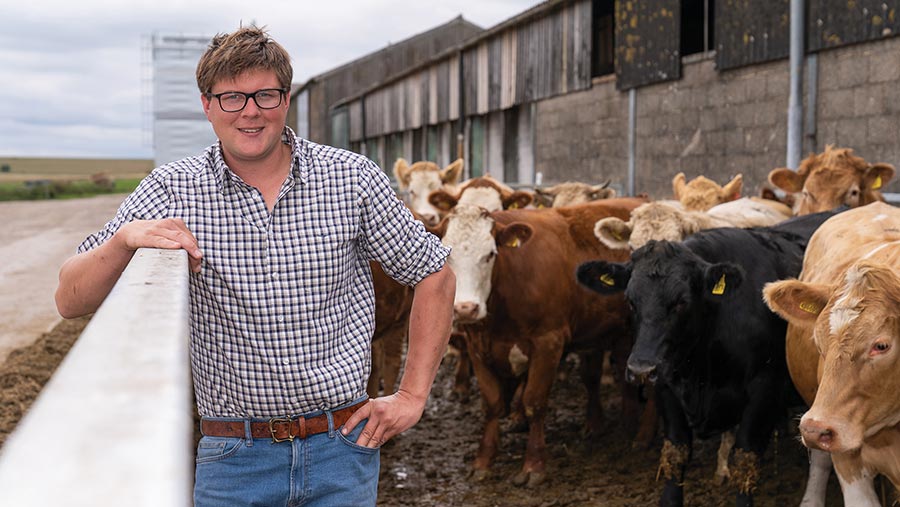 This makes it a reservoir for many plants, including orchids, that have retreated from other parts of the countryside turned over to higher output ryegrass or cropping.

He uses cattle help promote a diversity of plants and animals by managing swards at different heights in different areas.

“My main challenge has been to farm in the most ecologically beneficial way – to use beef farming in symbiosis with the environment, while simultaneously trying to increase efficiency, production, income and maintaining or improving animal welfare,” says James.

He is planning to use the positive story generated by this holistic approach to find an additional premium for some of the cattle he sells after a recent switch from selling stores to taking them through to finishing.

Notable achievements so far include promoting the habitat for ground-nesting birds including the stone curlew, lapwing and the great bustard – which was extinct in Britain between 1832 and 2004.

James is building an enterprise that has a very positive story to tell the consumer about the beef industry, where conservation of rare species is supported by high-welfare beef production.

The Farmers Weekly 2020 Environmental Champion of the Year is sponsored by Woodland Trust.

“At the Woodland Trust we recognise the crucial role farmers play in shaping the countryside. By working together we can unlock the benefits that only trees can provide – for their business, their wildlife and future farming generations.”
Darren Moorcroft, chief executive, Woodland Trust

Do you know a great Farm farmer who deserves recognition for the way they have developed their farm business?
Enter or nominate today
See more
Share this