This year’s three Mixed Farmer of the Year finalists have created, developed and successfully diversified their enterprises, with a strong passion for agriculture and their local community.

The 2020 Mixed Farmer of the Year finalists:

Crops are grown to feed their beef-finishing enterprises and prize-winning suckler herd and to manufacture their own brand of animal feed. The remaining crops are sold off farm.

The majority of the farm is rented, with the main holding on a successional tenancy, started by Tom’s grandfather in 1944. 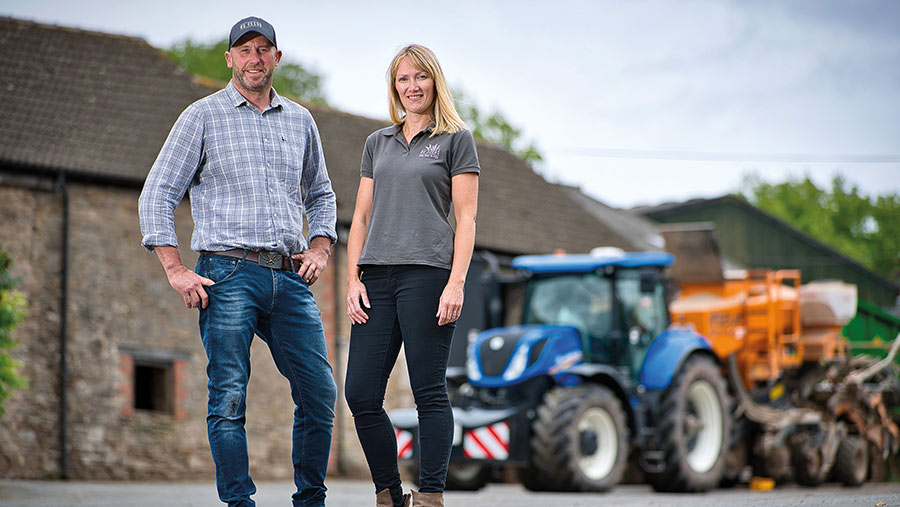 Since then, the farm has faced challenges, with markets changing, profit margins tightening and delays in Basic Payment Scheme payments of more than six months due to cross-border farming.

Budgets are now reviewed quarterly, while Julie gave up a career in food marketing to run the farm office and bring up their three daughters.

The pair hope to future-proof their business for their family, actively searching for new techniques.

Tom and Julie aim to produce the highest-quality cattle in the most efficient way, buying in stores and rearing their owns calves, which are finished on farm using home-grown feed. Male progeny are kept as bulls and sold between 12-14 months.

“We take pride in what we produce and work closely with our nutritionist to formulate rations and EID tag calves to regularly monitor liveweight,” says Tom.

The farm is also part of the premium high health scheme. Replacements are purchased from accredited herds and cattle are blood tested to manage disease risks.

The pair focus on market demands and are now introducing Aberdeen Angus for their easier-finishing carcasses.

Improving soils
The arable enterprise also boasts a healthy business, with yields in the UK’s top 10%.

In 2017, a Mzuri strip-till drill was bought using a 40% Leader grant. It has improved soil health and increased worm counts from 75 to 136/sq m.

“The strip drill has saved us £20,000 in cultivation costs, allowing us to invest in a new muckspreader,” says Julie.

Diversification
The Davies family’s biggest achievement has been the growth of their own-brand livestock feed – UC Feeds – which they started in 2016 when their stockman asked if he could buy their home-mixed cattle finisher blend.

The business has since doubled year-on-year, providing the farm with a reliable income, selling sheep and cattle blends using 60% home-grown cereal crops in tote bags or via bulk collection.

In 2018, an RDPE grant allowed Tom and Julie to buy a weighbridge, delivery trailer and roller mill, to enable them to produce more products.

“We are hoping to expand our feed business so we can use all our grain grown on farm,” says Tom.

The family also strive to make environmental improvements. They are part of the Mid-Tier Stewardship scheme and are looking into the tourism market, as they are located near Hay-on-Wye.

The beef, arable and feed enterprises at the Davies family’s farm successfully and sustainably support each other. Tom and Julie have a firm view of costings, marketing techniques and make the most out of grant funding.”

Ballingham Court, Herefordshire
Esther Rudge made the bold decision to take on the family farm when she was just 16 years old, going on to develop a thriving mixed farm, in partnership with her husband, Henry, and son, Monty.

The family run a beef, sheep and arable farm across 173ha in Herefordshire, alongside a successful orchard, glamping business and a range of renewable energy enterprises. 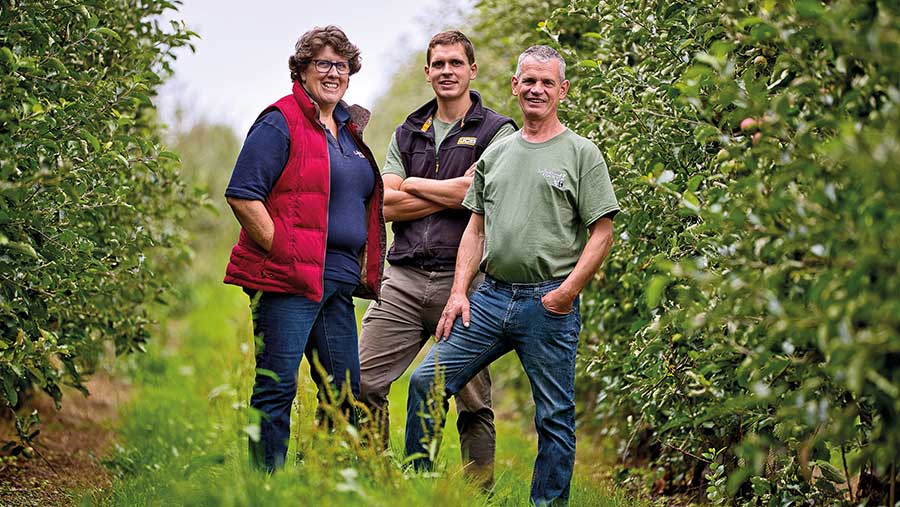 With a vision of building a business that prospers without subsidies and enhances the environment, the family have an open business plan and follow market trends, enabling them to make the best use of resources and opportunities.

System efficiency
Hoping to improve the efficiency of their 200-head beef unit, the Rudges changed suckler breeds from Friesian-crosses to Stabilisers, for easier calving and better-quality finishing traits.

“We are very customer driven. The stabilisers produce an excellent marbled meat, which is what customers want,” says Esther.

Two Hereford bulls with estimated breeding values in the top 1% are used. “Calves get up and away quickly, only weighing 35kg at birth. We haven’t used a calving jack in the past two years,” adds Henry.

Calves are weaned at a minimum of 50% of their mother’s weight and sold fat from 16-20 months of age, under contract to Waitrose on the Hereford beef scheme, averaging £1,231. The family always achieve top 10 supplier status and won the producers category in 2020.

Due to the onset of two family illnesses in 2018, sheep numbers at Ballingham Court declined, but this didn’t stop the family farming their 174 Aberfield ewes efficiently.

“We applied the same principles as the cattle to the sheep, changing the breed to a smaller ewe which produces the same amount of lamb for less input,” says Esther.

Sheep lamb in February to a NZ SufTex ram, with lambs sold by the end of June, averaging £94. The family now hope to expand the flock to 300 ewes.

Antibiotics use has fallen significantly since the family started working more closely with their vet, using vaccination where possible. Each enterprise is thoroughly reviewed and benchmarked through Reading University.

Diversification
In 2007, an 8ha apple orchard was planted, selling apple juice to Copella. The family now also press, bottle and sell their own value-added juice from their farm lane and to glamping visitors.

After a niche market was spotted, a small 3.2ha organic pear orchard was planted. The family harvest the pears themselves and sell to various organic box schemes, primarily Abel and Cole.

“The pears work extremely well for us. It’s important to find the work-life balance that works for you. If you double the numbers on an enterprise, it doesn’t necessarily mean you double the profits,” says Esther.

Looking to further future-proof their business, an 80kW anaerobic digester was set up in 2016, running at 92% efficiency and managed by Monty.

Inputs of the plant consist of 35ha of maize, which is grown on farm, and poultry litter from a local farm. A new macerator has been purchased, which will allow farmyard manure to be used, reducing their reliance on maize.

Environment
The family also run solar panels, sell their own kiln-dried firewood and have a firm interest in the environment, planting hedgerows, woodland and flower margins. They also have a strong connection with their local community and host several farm visits each year.

“Esther and Henry Rudge show an aptitude for business, actively looking for new opportunities that will benefit their diverse farming unit, while also focusing on the environment and their local community.”

Farming in partnership with his wife, parents and uncle, the low-input system focuses on using the farm’s resources efficiently, while selecting livestock breeds that suit grazing on Sites of Special Scientific Interest (SSSI), which covers more than half of their farmed area. 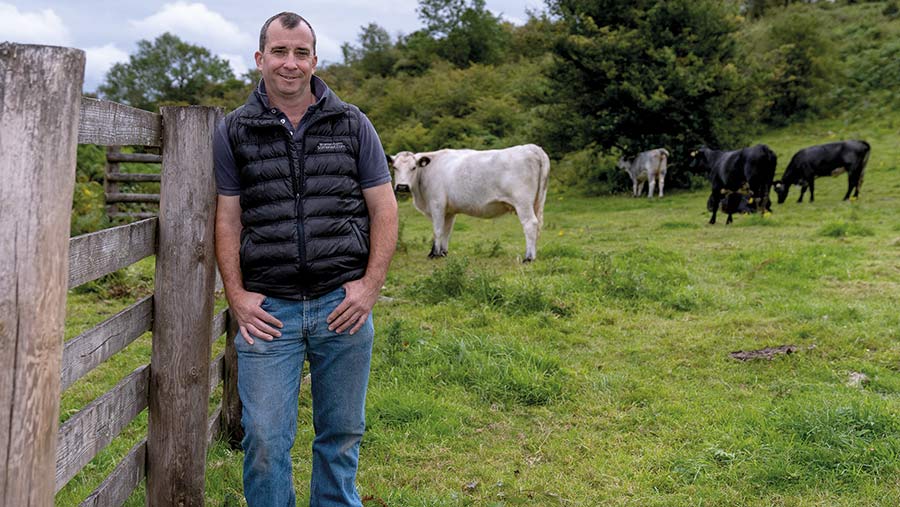 Through this, the family have created a system where few people can manage large numbers of animals safely and effectively, while also reducing working hours and overcoming the challenges of farming in a tourist-dominated area, which has seen nearly 100,000 visitors this summer.

System efficiency
The farm carries 1,200 breeding Beulah speckle-faced ewes due to their easy-care nature, hardiness and excellent mothering ability. They are kept outdoors  year round.

“We tried different breeds, but these are effective to rear and maintain, minimising labour,” says James.

Sheep lamb outdoors in early May in a tight pattern of just 21 days. Only five sheep required assistance last season.

Lambs are weaned in September and either sold as stores or fat via Sedgemoor Market.

“All our livestock is marketed locally – we’re great believers in an open marketplace. We try to balance information with what we can economically produce,” says James.

The family are considering introducing Suffolk terminal sires alongside the existing rams due to their larger carcass, which provide better market returns.

During winter, sheep are tac grazed on local dairy farms, where 26km of electric fencing is used and the animals are moved every three days.

“We aim for easy calving, shorter gestation and good survivability, with a cow of 550kg and good body depth with high udders.”

The farm originally ran Longhorn-crosses, but Angus-sired beef was introduced six years ago due to market demand, and James has now even started selling store cattle online.

Docility is also an essential cattle trait for safety, as large parts of the SSSI nature reserves have public access.

The farm runs a closed herd to lower disease risk, with necessary sire replacements purchased from a high-health-status Cornish farm with redwater immunity.

Kale, stubble turnips and wholecrop peas and barley are also grown on farm for livestock feed. Wholecrop is undersown with grass to reduce soil erosion and provide an instant source of cattle and sheep feed after harvest.

Community
James has a strong passion for the industry, taking on a wide range of roles within the NFU and wider industry. He is currently a Somerset representative on the South West Livestock board.

He also hosts farm visits each year, as well as regular tours for guests staying at the farm’s glamping facilities, which were set up in 2010 and is set for further expansion.

“I have a strong interest in educating visitors to broaden people’s knowledge of the agricultural industry and where their food comes from. I’m also active on social media to promote food and farming where I can.”

Taking advantage of the farm’s location, James also lets out fields for festivals and filming and is starting to host weddings.

James has effectively developed a low-input system by selecting livestock breeds that suit his challenging grazing land. He has a strong passion for promoting agriculture, engaging with the general public and taking on local industry roles.”

What the judges liked
• Strong ambassador and local voice for farming
• Efficient use of resources on low-input system
• Selection of livestock breeds to suit the farm’s location
• Engagement with the general public
• Overcame challenges associated with rural tourists
• Good diversification strategies, including festivals, film sets and weddings
• Early adopter of glamping

We are extremely proud to sponsor the Mixed Farmer category at the Farmers Weekly Awards. At Massey Ferguson, we are passionate about the future of farming and although it will always be a challenging profession, the long-term prospects of agriculture are strong and we look forward to being part of a bright future within this industry. We would like to wish all entrants a fantastic night and good luck to all!