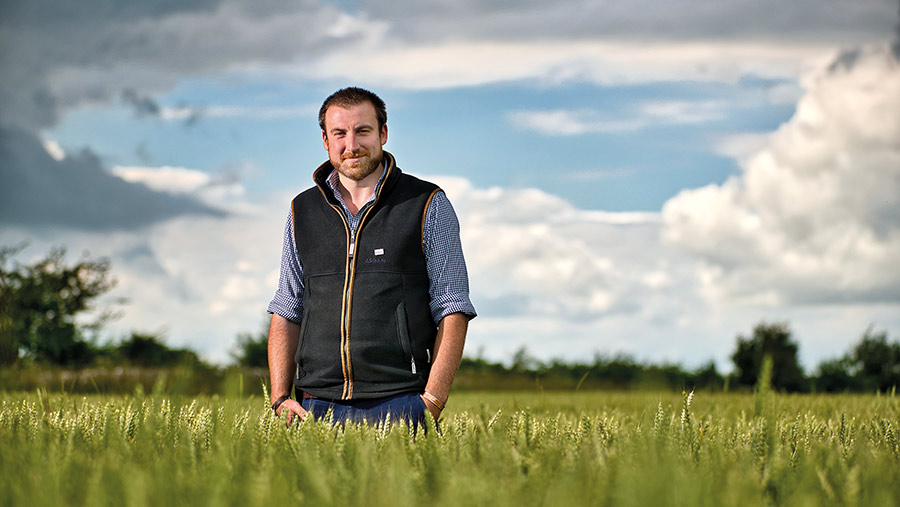 Since he won the award last October, Kieran says he has received great support from his farming clients across Wiltshire, Gloucestershire, Oxfordshire and Dorset, and also from colleagues within his company.

Fundamentally, Kieran says the win has not changed his career on a day-to-day basis.

But attaining the top accolade has helped him open doors to new projects with companies already involved in agricultural research in the UK and abroad, as well as others that have not been recognised for current involvement in the UK agricultural sector.

“It’s great to be an agronomist who is being linked to the research community and real on-the-ground R&D trial work that I can then implement into real practical action for growers,” says Kieran.

“Some of these projects that are happening abroad, which I might be working on, never see the light of day in the UK, so it’s nice to know I can convey those learnings and new techniques to my clients.”

He says farming is constantly evolving and he’s always looking to bring in new ideas and different tactics to his clients.

“I have to do things differently in conjunction with my clients to bring them benefits and value,” Kieran adds.

Currently, he is working on small, incremental changes with clients that consider the environmental impact of emerging Defra farm policy.

Kieran is considering how farms will look in the future and analysing his own clients’ businesses and asking if they are set up for different business activities.

“That may be linked with my hands-free work and asking: is the farm set up for robotics in any way? Can we implement change?” he explains.

“For example, is there a possibility to have an inter-row hoe weeding with a robotics system? That would free up staff to do other activities.”

Kieran’s FW Awards plaque takes pride of place on his office wall. It is hanging next to a painting of him driving a tractor and a drill when he worked as a tractor driver 16 years ago for Gloucestershire farmer Hamish Campbell.

Finally, Kieran describes taking part in the FW Awards as a wonderful experience, which he would recommend to others.

“If you get nominated, go for it,” he adds. “Even if you don’t end up winning, you still get to meet a great group of other nominees from other sectors in the industry which opens doors.”

Kieran Walsh is working on an exciting project to develop an end-to-end farm management system which can ensure every decision taken on farm is accounted for.

The platform is a privately-owned system which is being piloted and, once it is finished, he hopes it will record everything from accounts to crop management and the monitoring of those crops.

“The connectivity and compatibility of a lot of agricultural systems are not very good at talking to each other,” he explains.

“I believe that farms need a proper end-to-end platform that does everything from your payroll, accounting, nutrient management planning to your recording of nitrogen zoning, RB209 information too, to crop recommendations and monitoring your crops.”

The same platform could also be used to record work on variable rate seed and nitrogen applications, whereas now, this is all recorded on multiple, different systems.

In the future, Kieran thinks growers will have to become more efficient in recording and justifying their cropping decisions. For example, around application rates of nitrogen and phosphate, due to the heavy environmental focus under Defra’s upcoming Environmental Land Management scheme.

“Part of this system will help growers manage this and pool the data together in a way that makes sense. It’s something I’m passionate about getting correct on farms,” he says.

Because of the reduction in effective crop protection products and environmental constraints, Kieran reckons growers will have to get better at measuring the outcomes on the ground to understand what works best in different cropping situations.

To this end, his current focus is on measuring the agronomic changes on a day-to-day basis on farms and adopting future technologies to make growers’ lives easier. “It’s all well and good having the R&D and doing research, but you need to put it into action,” he adds.

The 2022 Farmers Weekly Arable Adviser of the Year is sponsored by FMC.