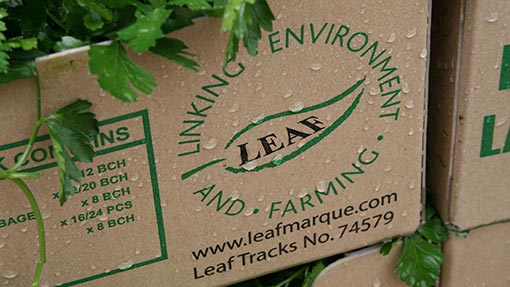 Leaf’s second global impact report – Leaf – inspiring and enabling sustainable farming – A review of our global impacts 2014 – was published at the Cereals event on Wednesday (11 June).

The report shows that Leaf Marque certification is increasing its domestic and global crop reach.

In the UK, for the first time ever last year more than 22% of fruit and vegetable crops by area grown were produced to Leaf Marque standards.

Cereals, fruit and fresh produce remain the focus of the Leaf Marque, with five crops accounting for 58% of the total UK area covered – wheat, potatoes, oilseed rape, lettuce and barley.

But more could be done to increase growth of the logo in other areas, especially livestock, the report says.

Globally, there was growth in the number of recorded livestock covered by Leaf Marque during 2013, with numbers increasing by 136% to 117,159 head of livestock, from ducks to dairy. In the UK, however, only 0.03% of livestock was covered by the marque in 2013.

“There is still massive room for growth in the livestock sector,” the report says.

The Leaf Marque was introduced by Linking Environment and Farming (Leaf) in the UK in 2003 to provide the food chain with a standard system that would prove that farmers are producing in a more sustainable way.

Since then, more than 30 countries have adopted the label, which can be found on many foods to help consumers make sustainable choices.

Some 90% of this total cropped area was in the UK, France, Spain, Egypt and South Africa. But the Leaf Marque is also growing in less developed countries such as Morocco, Senegal and Mozambique.

It gives farmers recognition for their environmental commitment and offers consumers the opportunity to buy affordable, responsibly produced food.

Recognition of the logo among UK consumers, however, is still fairly low at 9%, the report says.

Meanwhile, the Leaf members’ sustainability questionnaire in early 2014 found that 56% of respondents said their businesses were more economically sustainable than five years ago.

Writing in the report foreword, Leaf chief executive Caroline Drummond said: “There is a great deal to be encouraged by. It is clear that Leaf Marque producers and our members across the globe are making great strides in farming sustainably and reaching out to customers.

“But there is much more still to be done. There is no doubt that the future will present its challenges, but there are significant opportunities as well.”