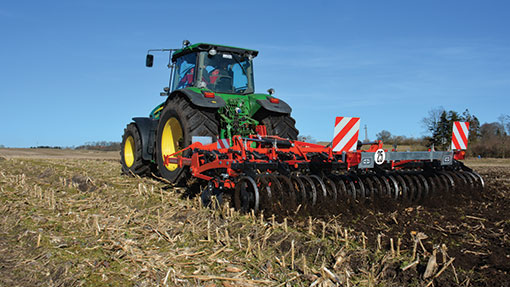 Implements for efficient cultivation and drilling will be on display at Cereals. Peter Hill provides a preview.

The tractor-mounted Crossland stubble cultivator from Gregoire-Besson (pictured above) is available in seven sizes from 3m to 5.5m working width, with a choice of 230mm tine spacing for intensive cultivation and 306mm spacing for heavy soils, deeper working and heavy trash conditions.

Either spacing can be used with the heavy duty pigtail or spring loaded auto reset Eurochisel tines, which can be had with a number of different points. Angled levelling discs, paddle tines, a triple row flexible tine harrow and both single- and double-cage packers can bring up the rear.

Formed to reintroduce the Italian manufacturer’s heavy-duty power harrows, tine implement and seeders, Alpego UK will feature the AirSpeed AS4 folding power harrow drill with a novel vacuum transfer system for moving seed from the 1,400-litre front tank to a 150-litre hopper at the rear. The 6m outfit suits tractors up to 450hp.

The main attributes of the “new” Bomford Dyna-Drive cultivator are simplicity and  low running costs – which are as relevant today as when the implement was first introduced in the 1980s.

In its latest guise there are updated tines on the two ground-driven rotors, an uprated driveline and improved crumbler-roller design. Four sizes from 2m to 5m are available.

Tines on the leading rotor engage the soil at a shallow angle and loosen it with a lever action; those on the second rotor, which turns three times faster thanks to chain drive from the front rotor, break up the resulting tilth,  which is then firmed by the cage packer.

A working speed of 7 to 10mph is best, says Bomford, at which the Dyna-Drive covers the ground at 4ha/h. 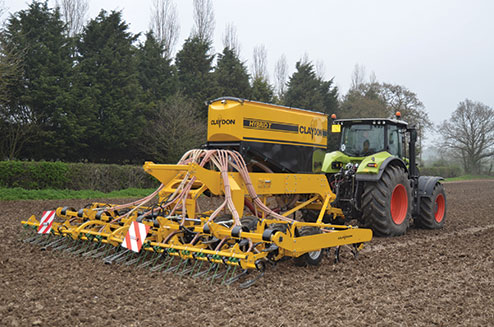 A trailed version of the Claydon Hybrid tine drill will deliver increased work rates through 6m and 8m sowing widths and a 5,500-litre hopper – up from 1,250kg on the 6m mounted version. The hopper is available for grain-only sowing or combined grain and fertiliser.

The Claydon twin-tine seeding system – a slim fissuring tine preceding the coulter tine – is mounted behind the hopper chassis, so is unaffected by the changing weight of the hopper contents. The central depth wheels are said to follow contours more effectively and the drill runs on the road on four transport wheels with locking mechanisms designed to keep the coulter frame rigid.

This linkage-mounted toolbar for taking out wheelings between permanent tramlines in a controlled traffic system is built by Cultivating Solutions. Four hydraulic auto-reset legs remove compaction with low surface disturbance.

When taken out of work using a parallel linkage mechanism, a towing hitch is left for a stubble cultivator (up to 12m wide) or seed drill at a constant height. Built for tractors up to 650hp, the RapidLift HD can also come with depth wheels, front discs and choice of rear hitch.

An improved range of disc and tine cultivators from Gregoire-Besson features remotely adjustable disc working depth for easier setting up.

The trailed Solis comes in three sizes – 4m, 5m and 6m – weighing in at 9.7t to 11.8t. It is designed for one-pass stubble cultivation using two rows of discs with three rows of tines between them, and a choice of finishing tools leaving a firm, level finish.

Each 620mm disc has its own roller bearing assembly but is mounted in pairs on a trailing steel arm that flexes to protect against stone damage.

Disc pressure is around 130kg for effective penetration in heavier soils. Eurochisel spring-loaded tines – or a pigtail design for lighter soils – work deeper, with the second set of discs breaking and levelling the tilth ahead of the single or twin Emopak open packer roller.

Added versatility comes to the Horsch Joker RT shallow disc cultivator with the addition of a levelling board option. It results from grower demand for greater flexibility, says Horsch.

The levelling board, comprising a row of adjustable paddle tines at the leading edge of the frame, will be available on 6m and 8m Joker RT cultivators for next season. It equips the implement to work down ploughed ground in addition to its role as a high-speed shallow disc cultivation tool.

Czech manufacturer Bednar will add two cultivators to its UK range through distributor Knight Farm Machinery. The Fenix FN (pictured) is described as a simple but versatile mounted implement with tines arranged in three rows for shallow stubble cultivation to deeper tillage.

An auto reset coil spring mechanism protects the tines, which can be fitted with a variety of points. Several different rear packers are also available.

Bednar’s Terraland TN chisel plough is designed for rapid tillage to a maximum depth of 65cm in a wide variety of soils. It has two rows of winged tines said to minimise power requirement while achieving high outputs; rapid point changes are also promised. A tandem spiked roller is the standard finishing tool.

A removable transport wheel that eases the load on the tractor’s rear axle when travelling from field to field is a feature of the Kuhn Venta CSC 6000 power harrow-seed drill combination.

It is said to be easy to remove and replace using a semi-automatic coupling. The 6m outfit comprises a 1500- or 2000-litre front-mounted hopper and a pneumatic seeding system mounted on the power harrow.

The hydraulic fold HR 6004 DR has a cooling system for the gearbox oil. Sowing is handled by Seedflex parallelogram-mounted offset double discs with up to 45kg of pressure, followed by large diameter press wheels to ensure a regular seeding depth, even at high seeding speeds, and good consolidation.

A new trailed cultivator drill from Kverneland embodies a number of features and refinement. Optional packer tyres lead the U-drill’s two rows of discs, a staggered row of packer/transport tyres and a new double-disc coulter assembly.

The 6m version weighs 3t less than Kverneland’s MSC heavy-land combination seeder. Hydraulic demands are simpler, despite having on-the-move depth adjustment and the ability to lift the front tyres, but there are more aggressive cultivating discs, while the 380mm “CD” coulters have up to 100kg of pressure (160kg on the MSC) as befits the drill’s light-land role. Seed is supplied by a 4350-litre slimline hopper. 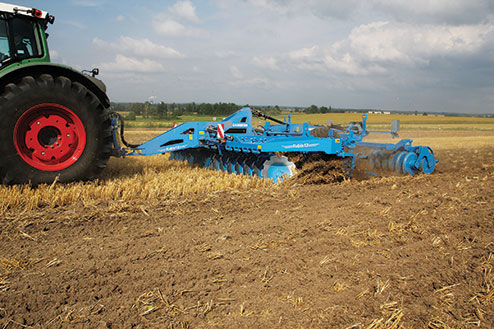 Larger diameter discs and a heavier frame and packer create an addition to the Rubin disc cultivator range from Lemken for growers wanting a higher performance compact disc cultivator for stronger soils. The Rubin 12 is available with a 3m rigid frame and up to 6m wide semi-mounted folding frame.

Pottinger has revised its Synkro stubble cultivator with increased tine spacing, an uprated frame, serrated instead of plain mixing discs and the addition of central working depth adjustment at the front.

The Synkro 1020 family comes with two rows of “C” tines carrying duckfoot shares to work at 5cm to 20cm depth; a steeper angle share improves penetration on heavy soils. Tine spacing increased to 45cm and 80cm of under-frame clearance suits incorporation of quantities of crop residue and trash. Working widths are 2.50m to 6m, with models 4m and wider having a folding frame. A trip-leg design with horizontal spring and a trip force of 550kg supplemented by shear bolts is more compact for reduced lift weight.

The “multiline” concept from Pottinger adds a box seed drill to a disc cultivator to create a flexible one-pass tilling and drilling combination. The trailed outfit pulled from the tractor’s lower linkage arms brings together a 3m or 4m Terradisc two-row compact disc cultivator and a Vitasem or Aerosem disc coulter mechanical seeder, carried on a rubber packer-roller so neither discs nor coulters are affected by the changing weight of seed in the hopper. It also allows the seeding system to be removed and the cultivator with packer used on its own.

Tillso’s new oilseed rape drill opener can be added to the Advantage subsoiler for one-pass oilseed rape seeding. The Sabre tine used on the subsoiler is designed for low surface disturbance while effectively restructuring the soil beneath.

Weaving Machinery will show a new version of the Sabre Tine no-till and min-till seeder featuring a UK-built frame and steel seed tank for the pneumatic sowing system.