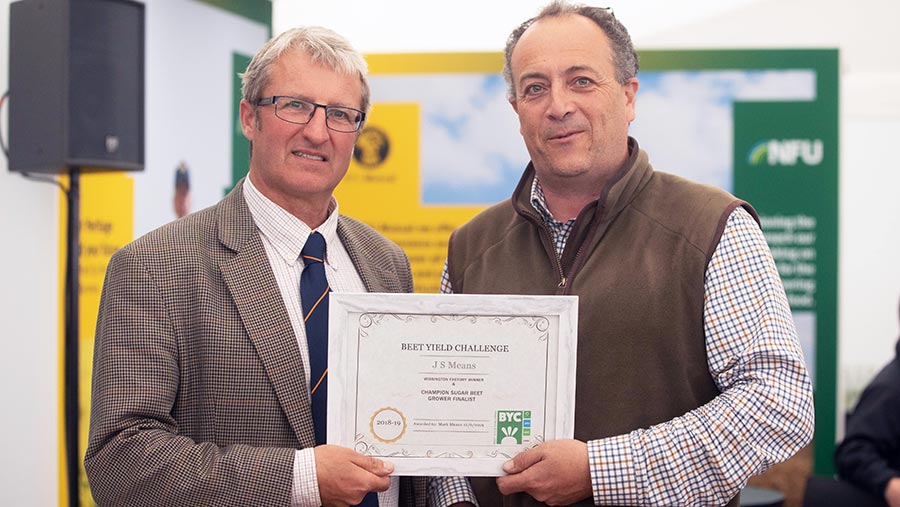 Mark Means is the winner of the second British Beet Research Organisation (BBRO) Beet Yield Challenge, managing to deliver a winning yield of 109.7t/ha, achieving 97% of crop potential in what was a very challenging year.

The impressive yield was achieved in a season that saw crops being drilled later than usual followed by a summer drought.

His crop was drilled on 18 April and harvested on 22 October, with the moisture-retentive heavy silt soil at JS Means Ltd, Terrington, near King’s Lynn, helping him to achieve uniform crop cover.

Visitors at the Cereals event heard that despite the weather, the overall average yield of the 26 crops entered was 90.1t/ha, only just below the 97.4t/ha achieved in 2017 in very different growing conditions.

This represented 75% of the crop’s theoretical potential, very close to that of the previous year, after much-need rain boosted late-season yield production.

Commenting on the results at the event, Simon Bowen of the BBRO said the combination of a late start to the 2018 growing season and subsequent lack of rainfall was a real test, with the sugar beet crop showing a remarkable level of yield resilience.

“Drought really limited root growth before September, especially on the lighter soils, with test digs done then indicating yields of 50-60t/ha,” he reported.

“Their subsequent good performance came after the rain, when crops re-grew canopies and were able to drive late season yield production. The final results showed that they were only just behind the 2017 crops.”

Some crops did less well, he acknowledged, with one fifth of the entries yielding below 60t/ha. These tended to be lighter-land crops, where canopies struggled to recover later on – such as those in East Norfolk which suffered from even less rainfall.

“This delayed drilling date had no effect on yields,” Dr Bowen said.

“This goes against some of our historic data and suggests that growers should focus more on soil temperatures, moisture levels and seedbed conditions, rather than the calendar date.”

The later-drilled crops went into warm soils with plenty of moisture, so reached 6-leaf establishment in no time at all.

“Where we really saw a difference was with the exceptional late-season growth of crops,” Dr Bowen said. “After rainfall, the above-average sunshine hours and warmth in late September and October allowed them to motor. The average yield increase for the period from September to January was 45%.”

Crops that lost their lower leaves during the drought were able to regenerate relatively young canopies, which allowed them to benefit from late-season root growth and sugar production.

Foliage disease levels were low in the drought period but increased from October onwards, with most crops receiving two fungicides. Those that had a third spray returned a higher yield.

The BBRO’s Beet Yield Challenge is open to all sugar beet growers and focuses on comparing actual yield with estimated potential yield. It was set up to understand and learn more about the key drivers of yield.