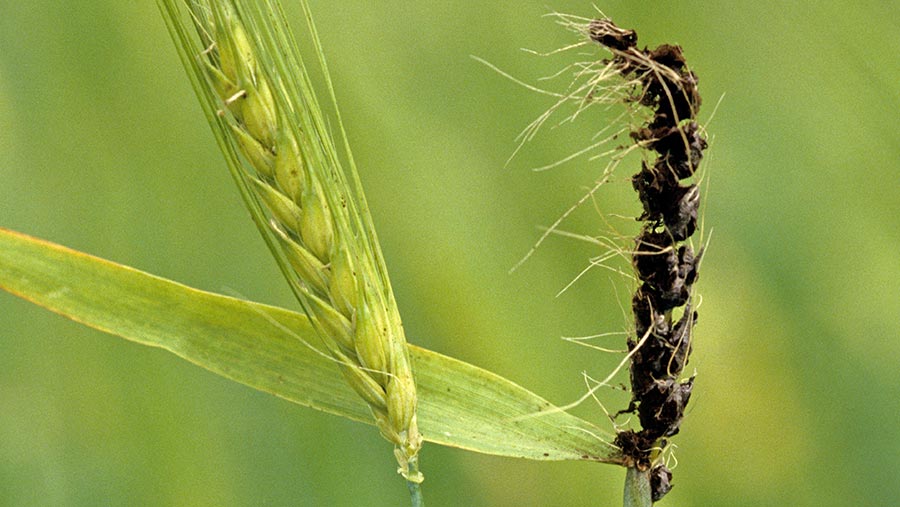 Testing has revealed early signs that the fungus that causes loose smut in barley may be becoming less sensitive to azole seed dressings.

Azole seed treatments have long been an effective way of controlling loose smut – an ear disease of barley caused by Ustilago nuda.

However, last spring there was an increased occurrence of the seed-borne disease in some fields that were drilled with treated seed, suggesting issues with seed treatment application or a possible resistance problem.

Fortunately, Syngenta has been testing loose smut for the past three years as part of its routine resistance testing using its labs in Switzerland.

Syngenta cereals fungicide expert and representative on the UK Fungicide Resistance Action Group Jason Tatnell said that a limited number of samples were tested in 2016/17.

Then last summer when there were reports of a problem, 18 samples were taken from affected fields in the UK and Ireland – making a total of 36 from northern Europe.

Speaking to Farmers Weekly at the Cereals event in Lincolnshire, Mr Tatnell explained that they were tested for sensitivity to three different azoles, at a range of concentrations.

All the samples from 2016/17 were within the sensitive range, he says.

However, last year’s samples showed a general shift in sensitivity, with some samples appearing that would be classed as less sensitive to azoles relative to the normal wild-type range.

It was not just the UK, this shift was also seen in samples from other north European countries.

There have again been reports of loose smut this season and Syngenta has been collecting samples. Mr Tatnell believes the 2019 results will help confirm if this is a real sensitivity shift.

He pointed out that a shift in sensitivity in lab testing doesn’t necessarily mean there will be a reduction in efficacy seen in the field.

“It is an early warning of what may happen in the field, there are a lot of samples still in the sensitive range.”

Seed treatments will still do what they have done before in the vast majority of cases and growers should not stop using them.

“We don’t want to cause alarm, the message is the need for greater awareness.”

As there are no real alternative treatments at present, his advice for growers is to ensure seed is well treated [covered] with an azole seed dressing.

The disease is airborne in the initial phase, therefore it’s important to take extra care with farm-saved seed, where the risk is greater.

The disease initially infects seed via airborne spores and seed testing can tell farmers if their seed crop is at risk.

Mr Tatnell highlighted that the hybrid seed production side of the company has further strengthened its efforts to minimise infection in seed crops.