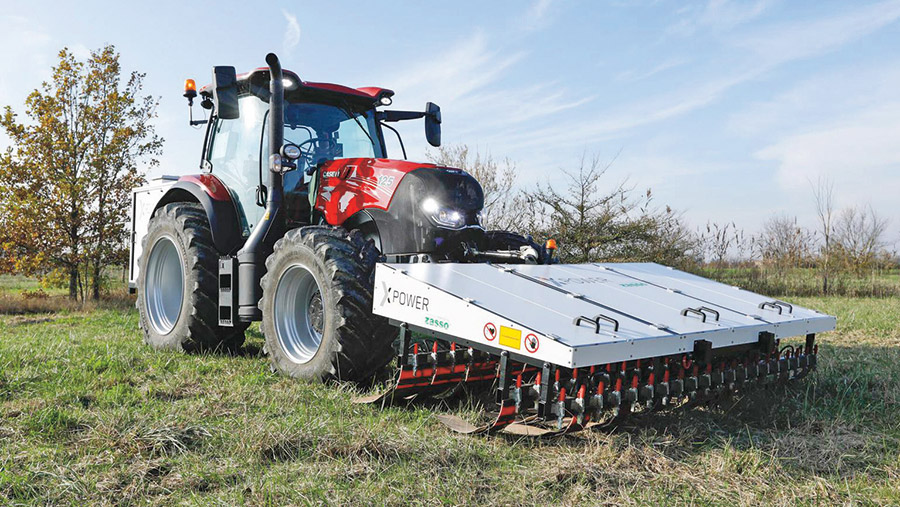 An alternative weed control technique that uses high-voltage electricity applied through purpose-built stainless steel applicators to kill weeds right down to the roots is coming to the UK later this year.

“This type of use of electricity for weed control is unique,” he said.

“It destroys cell structure and vascular bundles following split-second contact with the plant, so that it dries out, killing the roots down to 15cm as well.

“That makes it very different to systems based on patents that heat and boil the plants.”

The company’s first offering in the UK will be a 3m broad desiccant service offered through trained specialists, which is already in use in the amenity sector in Europe.

“Given some of the uncertainty surrounding glyphosate’s future and the pressures on chemical use, it’s very timely,” said Mr Downes.

“The tractor-mounted system is based on a closed, targeted electrical circuit that uses 7,000V to take out the plants it comes into contact with.

“It doesn’t matter what size the weeds are, when you do the treatment or what the temperature is,” he said. “There are also no resistance or stewardship requirements, or any residues to worry about, while biodiversity is unaffected.”

There is also no need for prolonged contact with the weed, making it suitable for on-the-go weed control and desiccation.

Two obvious potential markets in UK agriculture are cover crop destruction and control of oilseed rape volunteers, with a major advantage being that the technique does not disturb soil and so limits subsequent weed seed germination.

Another market, potato desiccation, is being investigated, with particular focus on tuber quality. Work looking at any effects on earthworms and other soil-dwelling invertebrates from prolonged dosing is also ongoing.

“Just as you would with chemical weed control, it is possible to make use of a combination of control methods. A physical operation, such as mowing or flailing, could be done alongside this technique in an integrated approach,” said Mr Downes.

There are also plans by the company to develop a height-selective version and a hooded option, he revealed, raising the possibility of using the technology to kill weeds that grow above the crop canopy, such as wild oats, and in row crops.

Health and safety is a priority, which is why trained operators will be offering the service on a contracting basis and multiple security features are included.