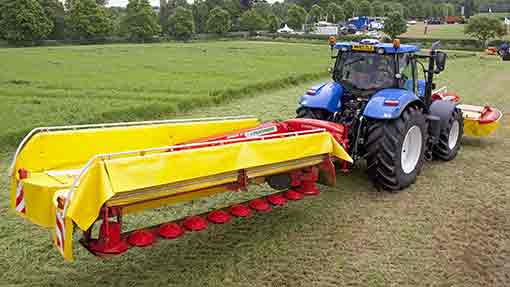 Mounted mowers can’t get much bigger than this monumental outfit from Pottinger.

At 11.2m wide it’s claimed to be the biggest set of mounted mowers in the world and with each wing measuring 4.3m it’s too long to fold vertically. Instead, the wings swing back horizontally and hang off the back like a plough would.

The maker came up with the design after customers called for bigger machines that didn’t have to be hooked up to a pricey, high-horsepower prime mover.

Because they were taking more frequent, lighter, cuts they also said they had less demand for a conditioner.

Pottinger’s answer was to build this relatively lightweight mower without conditioner that can be powered easily by a 160hp tractor.