Tillage-Live is always the best chance to see the latest kit in the field. James Andrews and Oliver Mark round up their pick of the action from the event at Welton, Lincolnshire

Visitors to the event got an early look at the newly updated Rubin 12 disc harrow before its Agritechnica launch.

It replaces the top-selling Rubin 9 and gets bigger 736mm discs, but the most significant change is at the back. Lemken is stressing the importance of cultural control in beating herbicide-resistant blackgrass and has designed a new rear roller to help encourage weed germination.

The new two-piece roller uses a DD packer at the front to compress deeper-lying soil. The second, Cambridge-style, roller has a wider profile to avoid smearing and help press the upper soil layers to conserve moisture and encourage seeds to sprout.

The bigger discs also mean it’s capable of working deeper – down to 200mm, can cope with more trash and should happily chop through head-high crops.

Moving two pins turns it from semi-mounted – where it is dragged around on a rear wheel- to a 3t, fully mounted machine. 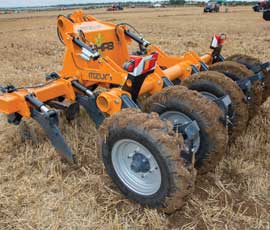 Called the Rehab, the well-specced five-legger comes with adjustable hydraulic auto-reset and hydraulic disc pressure as standard. Working depth is as low as 400mm and travel speed can be anything up to 10kph.

Front cutting discs are spaced at 600mm and lead the subsoiler legs to cut through any field trash and reduce soil disturbance. At the back there are five separate consolidation wheels to firm the ground once the subsoil has been cracked. They’re the same as those used on the firm’s strip-till drill and can be adjusted by adding or removing stops on the hydraulic rams.

Mzuri will also add a mounting frame for a Stocks unit in the future and you can tag a slug pelleter to the back, too. 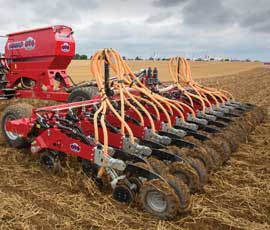 Although the 3m and 4m versions top the sales charts, it was the 8m, 24-row variant in the ground at Tillage.

It shares the same 3,600-litre hopper as the other 6m-plus machines and the same back-end layout as the entire DTS range.

That means there’s a leading cutting disc carrying the front half of the drill. Trailing that is a deep-working leg with hydraulic break-back protection and seven-stage depth adjustment. Seeding boots and consolidation wheels follow and Sumo builds its own metering system.

The company reckons 75% of DTS machines are run as a direct drill, and power requirement for the 8m is about 400hp.