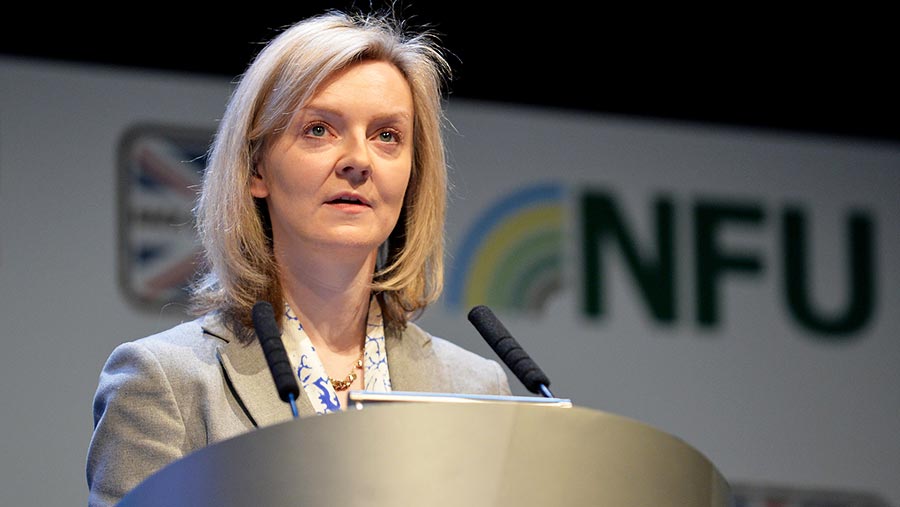 A UK vote to leave the European Union would be a “leap into the dark” followed by years of complication and risk for British farmers, Defra secretary Liz Truss has warned.

Ms Truss set out the case for the UK to remain a member of the European Union at the NFU annual conference on Tuesday (23 February).

“By voting to remain, we can work within a reformed EU to reduce bureaucracy and secure further reform while still enjoying the significant benefits of the single market,” she said.

“I believe we would be stronger, safer and better off in a reformed Europe but ultimately it will be for the British people to decide”
Liz Truss

“We are able to export our high quality products freely without the trade barriers we deal with elsewhere – and with a say in the rules.”

See also: Have your say in our EU in or out poll

Food and farming was the UK’s largest manufacturing industry employing 3.8 million people, with 60% of UK food and farming exports to the European Union bringing in £11bn.

Ms Truss said: “At a time of severe price volatility and global market uncertainty, I believe it would be wrong to take a leap in the dark.

“The years of complication and risk caused by negotiating withdrawal would be a distraction from our efforts to build a world-leading food and farming industry that brings jobs and growth to Britain.”

The “new settlement” secured by Prime Minister David Cameron with other EU leaders had given the UK the “best of both worlds,” said Ms Truss.

She added: “I am proud to be part of the government that it is delivering on its commitment to have an in-out referendum.

“I believe we would be stronger, safer and better off in a reformed Europe but ultimately it will be for the British people to decide.”

The NFU has not yet said whether it favours the UK remaining within the EU or leaving.

“This is a huge area of uncertainty for farming,” he told delegates.

“If the vote is to leave the EU there will be at least another two years of uncertainty ad new arrangements are negotiated.”

Defra minister George Eustice, who has joined the “out” campaign in favour of the UK leaving the EU, is expected to address farmers on the second day of the conference (24 February).