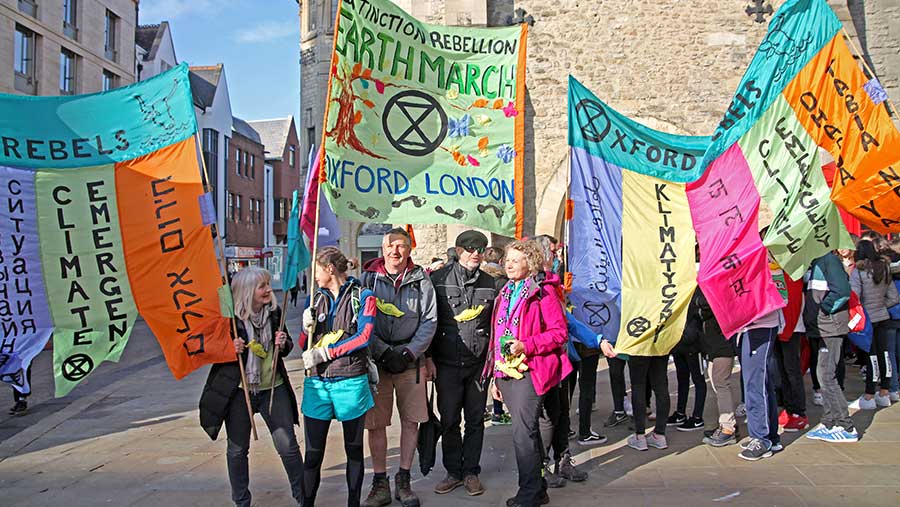 Climate change protestors Extinction Rebellion Oxford (XRO) are planning to carry out “peaceful actions” at next week’s Oxford Farming Conference (OFC), to push their view that farming damages the environment.

The demonstrators will make their presence felt outside the university’s examination schools and elsewhere in the city centre, where more than 400 delegates from farming and the ancillary sectors will be holding their annual event.

XRO says it aims to “highlight how the majority of our intensive food and farming systems, represented by the Oxford Farming Conference, pollute the land and add appreciably to greenhouse gas emissions in the UK”.

It claims that food and farming account for around 20% of all greenhouse gas emissions.

“The Oxford Farming Conference has been running since 1936, though today it seems to be less about farming and more about the interests of the UK’s multi-billion-pound industries that control farming and therefore the land,” said XRO co-ordinator Jane King.

“Restoring our ecosystems and natural carbon sinks – soil, woodland, wetland, species-rich permanent pasture, moorland, peatland and oceans – to capture carbon from the atmosphere is, at this time, the only feasible solution to avoid climate catastrophe.”

A statement from the group said it believed farmers “are at the mercy of powerful food retail, manufacturing and agrochemical industries, dictating what they produce and the methods they use”.

It therefore criticised the involvement of big industry corporations, including Syngenta, McDonald’s, Sainsbury’s and Marks & Spencer, as sponsors of the conference.

“They all have immense lobbying power, on behalf of their shareholders, that locks farmers into ‘business as usual’ and disadvantages family-run farms,” it said.

But these claims have been dismissed by the conference organisers.

“We agree there is a need for farming to change globally, but farmers in the UK are already adapting, faster than in many other countries,” said conference chairman Matthew Naylor.

“Eliminating food poverty and improving public health, which are among the topics to be covered in our conference, also need to be considered alongside the move to more ecological farming systems”

Mr Naylor insisted that the Oxford Farming Conference did not represent any particular view. “We are an open forum and encourage different opinions,” he said.

The input of large businesses as sponsors was essential, he added, as the costs of putting on the event in Oxford were high. “But none of the sponsors have any input into the content of the conference. The directors of the conference cover a very broad church, as do the speakers.”

Mr Naylor also noted that, according to official figures form the Committee on Climate Change, farming contributed less than 10% of greenhouse gas emissions.

The notion that big agricultural businesses were, by definition, bad for the environment was also challenged by Syngenta spokesman Luke Gibbs.

He explained that his company was investing $2bn over the next five years to accelerate innovation and improve the efficiency of food production, while lowering the environmental impact.

“Syngenta does not ‘lock’ farmers to any products or processes,” he said. “Farmers make choices dependent on context, conditions and objectives.

“Overall, we believe farmers take great care in the choices they make and recognise the critical importance of environmental protection”.

Mr Gibbs added that Syngenta was constantly aiming for better performing products, which includes the use of biologicals and precision farming techniques to lower the environmental profile.

“There is certainly a move away from volume-use chemistry, though this has to progress at a realistic pace.”