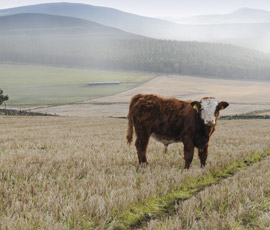 Farmers in Scotland can now find out information about the organic matter content of their soil by using a free soil carbon app.

The new app, known as SOCiT (Soil Organic Carbon information), provides information that can help farmers, and others, make better management decisions as a result of improved understanding about the condition and fertility of their soil.

The James Hutton Institute, in partnership with Quality Meat Scotland, has produced the app for iPhone and iPad. It is aimed at farmers, land managers and other land users who want to know how much carbon is in their soil, which is important for the fertility of the soil, water management as well as climate change.

Speaking to Farmers Weekly at the Royal Highland Show, Colin Campbell from the James Hutton Institute said the app provided a fast and easy way to assess the soil carbon in the field and to see how well soils were performing.

“The app requires the farmer to take a picture of his soil using his iPhone, with a sophisticated model within the app used to predict topsoil organic matter and carbon content,” he said.

“This new app provides an alternative to expensive and time-consuming sampling and chemical analysis and can be used in the field without the need for soil science expertise or training.”
Professor Colin Campbell, James Hutton Institute

The new technology works by using the national soil database for Scotland which has more than 600 different type of soil samples recorded. “The darker the soil the more carbon is in the soil,” explained Professor Campbell. “We have been able to combine the soil database with a way of photographing the soil to predict the concentration in the field.”

According its creators, the app is user-friendly and contains detailed instructions, enabling the user to get an estimate of soil carbon content within minutes. All that is needed is an iPhone, a colour correction card (available upon request from the James Hutton Institute) and a spade to obtain an estimate of topsoil organic matter content within approximately five minutes.

The technology is thought to be fairly accurate due to the strong correlation of soil colour and the level of carbon. However, it is only accurate for use on Scottish soils as it has been based on the Scottish soil database.

Prof Campbell said for farmers to be able to manage their land in a way that increases soil carbon capture and long-term storage they need to be able to monitor soil organic matter content rapidly and cost-effectively.

“This new app provides an alternative to expensive and time-consuming sampling and chemical analysis and can be used in the field without the need for soil science expertise or training,” he added.

When the soil carbon is low farmers can then look at how they can increase carbon value. “Although a lot of grassland soil carbon levels are good, there are an increasing number of arable soils where continuous cropping of wheat has resulted in carbon levels at the lower end of the scale.”

SOCiT can be downloaded from the App Store.