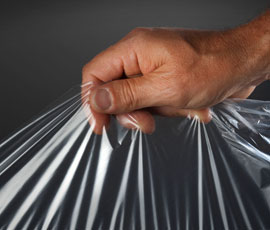 Polydress O2 Barrier 2in1 from Kelvin Cave and developed by RKW ProAgri combines a single sheet of black polyethylene silage film with a polyamide vacuum film.

The new film offers 6 to 10 times less oxygen permeability than previous systems and ensures the rapid formation and sustainability of anaerobic conditions in the clamp. As a single layer it allows the sheeting of a clamp to be accomplished quickly and easily.

Within a short time of being laid the vacuum film separates from the top film as it absorbs moisture from the silage, and is sucked down onto the silage to create an airtight seal.

The product can be recovered and separated into the different components and then recycled or disposed off according to waste regulations regarding but, being 40% lighter in weight than a conventional two sheet system, recycling and disposal costs are reduced. Reduced weight also allows easier handling on the clamp, saving time and labour.

The film combination is half the thickness of a conventional cover with two separate films. The use of only one film instead of two yields advantages in terms of transportation, logistics, storage, and labour input.

Find out more about Livestock 2012