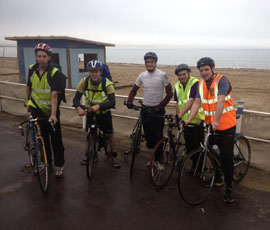 Intrepid Young Farmers will be relying on pedal power to get to the NFYFC’s AGM in Lancashire, raising thousands for charity in the process.

Worcestershire YFC county chairman Helen Harcombe and a team of 16 other members will set off from Blackpole tomorrow (30 April) and cover the 214 miles across the National Cycle Network before arriving at Blackpool Tower on Friday (3 May).

They’re hoping to raise £10,000 in aid of two charities, to be split between Cancer Research UK and Worcester Samaritans.

“Cancer Research is a charity close to our Federation’s heart,” says Helen. “After the passing of a member last year to the disease, it was a unanimous decision to raise funds for this charity.

“It’s been a challenging time for farmers over the past 12 months, both economically and due to the poor weather. As a rural youth organisation, we have become increasingly aware of the challenges individuals and businesses face.

“All of the money raised for the Samaritans will fund their call centre. We hope that it will also raise awareness of their services and the support they can provide.”

Six of Worcestershire’s nine clubs will be represented by their members and the team consists of cyclists of varying experience.

“Before signing up for the challenge, several of the team had never cycled more than 15 miles in one go but now they will be expected to cycle over 50!” says Helen.

“For all of our cyclists, completing this challenge will be a huge achievement. The whole event, from the planning stage to the actual challenge itself, has been a real team effort.”

Meanwhile, a team of five will be leaving the Devon YFC office today (29 April) and will be arriving in Blackpool on Thursday (2 May). They will be staying with other county federations on the 320-mile journey and have already raised £4,000 for ParkinsonsUK and the Devon YFC new building fund.

Contribute to Worcestershire’s fundraising efforts.If you’d like to sponsor the Devon crew, ring Paul on 07929 982 868.