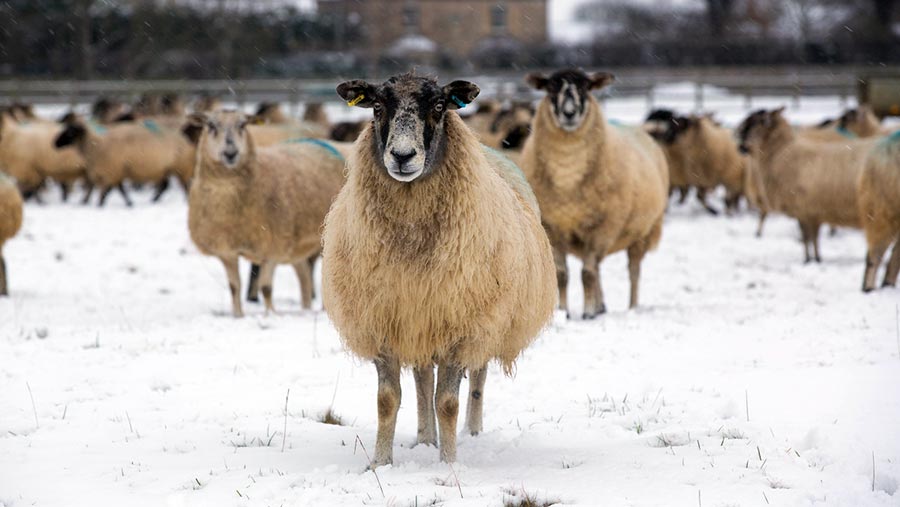 Winter is still very much here as areas of the UK were buried under a white blanket during the last few days of February.

Regardless of the weather the farming community was out in the blizzard and managed to share some snaps online.

The snowfall has caused widespread disruption across the UK, with areas of south east, northern England and Scotland badly affected.

Schools were closed and hundreds of trains were cancelled as the Met Office issued a number of severe weather warnings.

Temperatures have plummeted to as low as -8.9C in Farnborough, Hampshire, with up to 10cm snow falling in Kent, Surrey, Suffolk and Sussex overnight on Monday (26 February) and into Tuesday morning.

Further snowfall has been predicted for later this week, with as much as 40cm expected to fall in north-east England and Scotland on Wednesday and Thursday (28 February and 1 March).

With lambing in full swing and stock to feed, no amount of bad weather can ever bring British farmers to a total standstill though.

They’ve been sharing snowy snaps on Twitter and Instagram as they went about their work with the daily jobs.

We’ve picked eight of our favourite farmer photos of the snow to share with you.

Around 15cm of snow in North Yorkshire had partially hidden the dry stone walls, but this made for a beautiful scene.

Farndale in North Yorkshire. We’ve about 15cm of snow laying about the place.#beastfromtheast pic.twitter.com/riImIONoeF

The pygmy goats on Muddy Boots Farm in Essex were reluctant to venture out into the light dusting of snow.

This snap posted on Instagram by Rebecca Day showed two lambs born onto a rather chilly blanket.

Farmergeddon posted this snap on Twitter of snow falling on sheep rather than cedars.

Sheeples very happy to see me for a hay refresh #beastfromtheast pic.twitter.com/Ct8OE4HN5G

Sheep plod in line through the snow in County Durham as the beast from the east buries fields.

Lambing was just getting under way when the snow fell in this snap captured by Alive Helliwell.

Well the #beastfromtheast has arrived just in time for lambing to really get going! What perfect timing 😫
Let’s hope any lambs already out in the fields can stay warm and cosy snuggled up next to mum! #farming #lambing18 #snow
📸Alice Helliwell pic.twitter.com/XBgVQ2QoOa

Feeding the sheep in Wales was an new challenge as the snow caused a whiteout for farmer David Lloyd.

These guys don’t seem at all fussed by the white stuff coming down in Norfolk, but then again they’re equipped with the best cold weather coats of all.