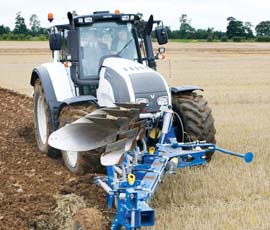 Front-mounted ploughs first appeared in the late 1970s, but never quite caught on. But with fuel prices higher than ever and front linkages improving, could they be about to make make a return?

UK plough maker Dowdeswell Engineering plans to show a pre-production front-mounted plough in action for the first time for many years on its plot at Cereals 2011 in June. The newcomer is derived from the 105 Series mounted reversible introduced last year for tractors up to 190hp and will be available in two- and three-furrow sizes.

In France, where front-mounted implements have always been more popular, a resurgence of interest in push ploughs over the past couple of years spurred Kverneland to develop a new model. The FR is available in two- and three-furrow sizes with a choice of shear-pin or leaf-spring auto reset protection.

One of the main reasons why front ploughs never caught on in the past was the difficulty of operating two ploughs at the same time. But modern headland management systems, which automate the lifting, turning and lowering of equipment, are helping.

“People like the idea in principle, but are uncertain about coping with the awkwardness of a front-rear combination on the road and in the field,” says the firm’s Steve Mitchell. “Certainly the man on the tractor seat has to go along with the idea, because there’s obviously more to it than using a single plough.”

Modern front linkage designs are also helping, he adds, because they are stronger, more closely integrated into the front of the tractor and, in some cases, feature draft control.

It’s also a good way to save fuel. Sweden’s national agricultural university compared the performance of a 135hp tractor running with a four-furrow mounted reversible on the back to one with either a ballast block or two-furrow plough on the front.

With the front plough increasing the working width by 50%, output on heavy clay was lifted sufficiently to trim fuel usage by 10% from 18.4 litres/ha to 16.6 litres/ha.

Dowdeswell’s Jason Stringer agrees about the fuel-saving aspect of front ploughs: “It takes diesel to move a ballast block around, so it makes sense to use productive weight in the form of a front plough,” he says. “You get a more balanced outfit that will handle more furrows than with a bigger rear-mounted or semi-mounted plough.”