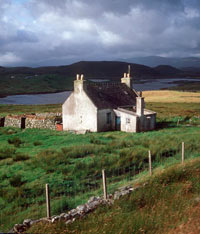 Scotland’s crofters have condemned government proposals to change their industry as misguided and threatening to their traditional way of life.

The Scottish Crofting Foundation (SCF) and NFU Scotland, which represent the 13,000 people who work the land part-time in the Highlands and Islands, have submitted highly critical responses to the government’s draft Crofting Reform Bill.

The consultation closed this week after a deluge of criticism from all quarters.

Marina Dennis, chair of the SCF working group on reform, warned that the Bill failed to get to grips with what is happening in the industry and doesn’t address how to make crofting pay.

“We cannot continue to lose money on crofting activity just because it is a good practice,” Mrs Dennis said. “Crofting out of loyalty rather than logic is irrational economics.”

Jo Durno, chair of NFU Scotland’s Crofting and Highlands and Islands Committee, said the Bill needed significant changes if it was to address the concerns of crofters.

She added: “We have serious concerns that any new mandatory crofting register could create more problems and disputes than would otherwise exist.

“Our calls for simplification also extend to the support available for croft housing and a plea that existing lending arrangements are preserved without the proposed interference.”