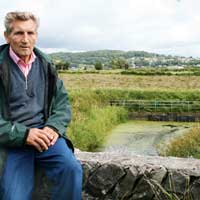 A group of farmers in Cumbria, whose grassland could be flooded when the Environment Agency turns off water pumps in 2012, is set to take control of drainage in the north west of England.

What began as a small action group – the Lyth Valley and Witherslack Drainage Committee – could now trigger the reinstatement of a major drainage board for the region.

Internal drainage boards were common in the UK and included farmer representation. But many were disbanded in the 1980s by the government and the Environment Agency assumed control of issues in the north west of England.

With the agency looking to save money to meet tighter government budgets, that may be about to change.

Cumbria farmer and committee chairman Jim Bland (pictured) has already received a positive response from farm minister Jim Paice over the proposed establishment of a board.

“More than 100 years ago a system of drainage dykes was built in the valley and in the 1980s the Environment Agency installed pumps to improve the exit of water,” said Mr Bland, from Ninezergh Farm, near Heversham.

“There are about 50 productive grassland farms in the valley but if the pumps were turned off and the dyke system deteriorated the area would soon become a swamp,” he said.

Heavy rainfall could mean large areas of the valley – which receives 50in of rain a year – would remain under water for six weeks at a time.

“Agricultural output in the valley has improved massively since the pumps were installed. It would be a tragedy if we had to go back to coping with land that was under water for long periods,” said Mr Bland.

“We plan to take over and run the pumps in the Lyth Valley in 2012 under a newly-established IDB. But I hope its remit can be extended to cover a much wider area and provide peace of mind on drainage issues for others farmers with low-lying land in south Cumbria and north Lancashire,” he said.