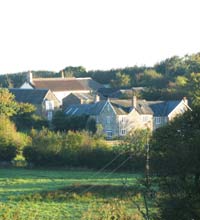 Stags is about to launch a conservationist’s dream in Devon a 220-acre farm with two farmhouses, 100 acres of woodland and internationally-rare culm grassland.

South Week Farm, near Chumleigh, was bought by the existing owners 12 years ago and has been painstakingly restored to a profitable, sustainable and environmentally treasured piece of history.

The six-bedroom farmhouse dates back to 1430 and was derelict when Matthew and Susan Knight bought it. The couple used timber and stone from the land to renovate the main house, as well as the separate three-bedroom North Week farmhouse, which they now rent out. They even grew their own straw to thatch the roof. “It’s about as local as you can get in terms of materials,” said Mr Knight.

Overgrown meadows have been restored to species-rich culm grassland, which features an array of meadow species, favoured by the rare Marsh Fritillary butterfly. Mr Knight joined the Countryside Stewardship Scheme, reinstated hedgerows and fence boundaries, and converted the land to organic.

He now runs about 60 Aberdeen Angus suckler cows on the land all year round and keeps 50 sheep in the hay meadows and cider orchards, which have been replanted and are used to make organic cider in conjunction with neighbouring farmers.

“It’s very low input and we are taking a whole different approach,” he said. “We don’t have to buy minerals or fertiliser, and never have to call the vet for medicinal purposes because the cows self-medicate on the herbs and willow.”

Mr Knight also planted 25 acres of mixed woodland, which locks in 10t/ha of carbon each year. He set up his own mobile sawmill, which employs two other full-time people, producing green oak timber for buildings, as well as dry wood for flooring, staircases, and his own hand-made furniture.

With steep valleys, the woodland lends itself to shooting. Game includes snipe, pheasant, roe deer and red deer. There is also a trout-stocked lake and Huntacott Water, a favourite otter haunt.

“We feel honoured and privileged to have looked after and enhanced such a rare habitat, and are proud to have brought the farm back to life,” said Mrs Knight. “We would like someone to buy it who’s really interested in the conservation side and who can come and make a living out of it.” 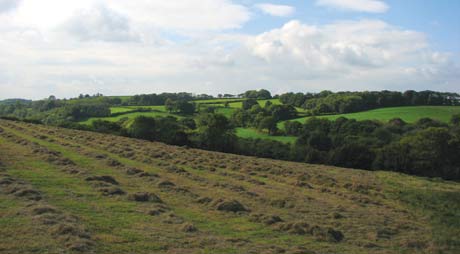 The farm brings in £10,000 a year in stewardship payments, with a single payment of £7500 and farm woodland premium payments of £750 a year. Mr and Mrs Knight let North Week farmhouse on an assured shorthold tenancy for £14,400, and the sawmill brings in a further £25,000 a year.

“We’ve managed to get the business running profitably, without expanding massively. This is now a sustainable system,” Mr Knight said. The property also has a range of modern barns and a courtyard of stone outbuildings, including a large threshing barn and roundhouse, which offer potential for development, subject to planning permission.

Mr and Mrs Knight plan to move to a smaller farm closer to the coast where their four teenage children can indulge their passion for surfing and maybe get local jobs. They admit it will be a wrench to leave the farm. “We’ve decided it’s time to leave someone else to be the steward of this land,” Mrs Knight said. “But we are leaving a love affair it is a real wrench and we can’t imagine ever living anywhere so special again.”

Rob Ayre, land agent with Stags, expects the property to attract considerable attention from buyers seeking a lifestyle change. “It’s a lovely peaceful spot, but it does self-finance. It’s a very rare opportunity.”

Buyers are still interested in small farms in the West Country, he added. “The desire to move here is never going to go away it is a beautiful place to live. People are starting to take a view that their money is not doing anything for them in the bank. But even if you take the investment side out of it, it’s really just a wonderful place for somebody to live.”

Although very private and rural, South Week Farm is just five miles from the small town of Chumleigh, which boasts three pubs, a primary school and a college. The property is on the market as a whole, with a guide price of £2.2m.