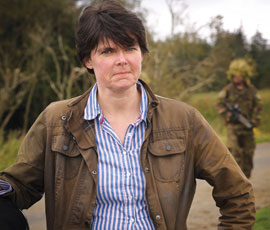 We’ve just had our annual organic and FABBL inspection. It all went smoothly of course, but we are beginning to question whether we will be continuing our organic registration this time next year.

Before 2001, Jake was somewhat of an organic-sceptic. I think he associated it with sandal-wearing hippies planting crops according to the phase of the moon. So when a friend of ours announced he was going organic, Jake said he would eat his sombrero before he ever did such a thing.

A foot-and-mouth crisis and a sombrero sandwich later, we signed up.

As with many other livestock farmers whose animals didn’t get foot-and-mouth, we had found that during the crisis our market prices collapsed and the restrictions multiplied our costs. We needed to find a way to make a living and going into organic seemed to make that possible.

In the early days, we were paid to convert, then found we could obtain a decent premium over conventional prices. It turned out that an organic system was actually very suitable for our farm. Furthermore, contrary to popular belief, we found that a number of very hard-headed, switched-on agriculturalists were operating organic systems, not just people opting for a lifestyle choice after making a fortune doing something else. So, all in all, our doubts were confounded and we were satisfied converts.

Recently, however, we have found that the sales premium has all but disappeared, while the associated extra costs (such as paying £120 a tonne more than the price for conventional feed), are massive.

In addition, the effects of consecutive wet summers have made weed control more difficult, particularly with regard to rushes.

At present the main thing keeping us in an organic system is the fact that we are in a 10-year OELS/HLS agreement. So, some interesting discussions are going to be had with Natural England before Jake finally hangs up his sandals. However, we may well be on the way out.

On the sporting, rather than the agricultural field, the junior rugby season is well under way. It didn’t get off to a very good start. In the first match a boy punched Archie in the face, so he demanded to know why, and seemingly judging these actions to be equally bad, the referee sent both players off to the sin bin to cool off. Archie had a fist-shaped bruise on his face for more than a week. Happily, however, he has managed to remain on the pitch in subsequent matches.

Off the field, owing to various comings and goings during the summer, a hole had developed in the coaching team at Archie’s rugby side; a hole which, in the absence of alternatives, Jake has volunteered to fill. He has been on a course, obtained his CRB check and is now qualified to put out the cones at training in his role as junior assistant coach.

Importantly, Jake now qualifies for the official tracksuit, possibly bearing his initials, which I have noticed is very on-trend for middle-aged coaches of junior teams.

Jake is not given to wearing “sportswear” and claims to have last owned a tracksuit while working in New Zealand in 1981.

He has not played a lot of sport recently either. Prior to last year’s fathers v sons cricket match, his most recent competitive endeavour was doing the Great North Run with my sister in the early 1990s. He rejected the idea of doing any training beforehand on the basis that he was fit enough anyway due to his job. Despite this rather cavalier attitude, he did manage to complete the 13.1 mile course in a respectable time. This would have been even better if my sister hadn’t had to queue at the loos at Gateshead Stadium for 20 minutes during the race.

Jake’s coaching role is really just to give the head coach some support so he doesn’t have to do everything himself. Based on this recent sporting record, I think that is probably just as well.

Back in June, I reported on the clean-up work that had begun following a fuel tanker spillage on our main route into Newcastle, the A696. The news is that nearly five months on, the temporary traffic lights are still in place and the search for the escaped fuel continues with a resolve and determination reminiscent of the Canadian Mounties.

It is hard to tell from the queue at the traffic lights what, if anything, is happening in the clean-up process, but it seems that a strategy of slowly-slowly, catchy monkey has been adopted. The chaps are well dug in and are probably planning for their Christmas party.

I wonder if they might try to inform inconvenienced road users of progress. Maybe they could design something like the Blue Peter Totaliser which used to show how much had been collected for the annual appeal each week, when I was a child. Perhaps something in the shape of a petrol pump or a tanker would be appropriate. It would give us something to look at as we wait for the lights to change and give the men on site something to do.