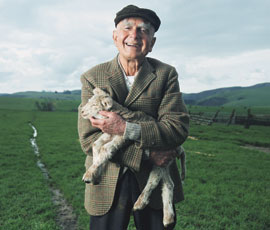 Farmers Weekly’s fictional agony uncle Farmer Frank has ruffled a few feathers since he began dispensing his homespun wisdom. After all, he’s not qualified, not experienced and, according to some, not all there. But here he dispenses more of his no-nonsense (OK, not entirely nonsense) rural remedies.

Is it true that you are opposed to renewable energy?

I certainly have an issue with wind.

What did you make of that Panorama programme about subsidies?

I meant to tape it but appear to have pressed the wrong button. I ended up recording a film called Naughty Nurses II. I have no idea what it’s about. Although Naughty Nurses I was excellent.

What is the most useful tool you’d recommend for the farm workshop?

I had a one-handed wrench once. But that’s another story.

What’s your view on GM?

They’ve made some great cars.

What do I need to do to become a shepherd?

Some sheep would be a good start.

Are you going to any conferences this year?

I won’t be welcome at the Women’s Food and Farming Conference in April after an incident in the dining room last time I attended. I maintain to this day I thought it was a water melon.

What do you make of Glastir?

Don’t know about Glastir. Once knew someone who had a glass eye, though.

I have a fear of dogs – how can I combat this?

That’s not uncommon. You just need to remind yourself that the overwhelming majority of dogs are harmless, placid and gentle creatures – other than the ones that are savage, vicious brutes that will attack for no reason with their huge teeth.

I heard a scurrilous rumour about your lack of qualifications to offer advice on psychological matters. Can you reassure me – are you qualified?

Yes. Although not technically in counselling. It’s a City and Guilds qualification in welding, to be precise. But that’s close enough as far as I’m concerned.

Can you give me any advice for putting together a CV?

Got a question for Farmer Frank?

He’d love to hear from you. Well, actually he wouldn’t – because as he points out, he’s paid a flat rate, not on piece work – but you could send it in.

He’ll respond to a selection and some will also appear periodically in Farmers Weekly magazine. You can submit your question by: