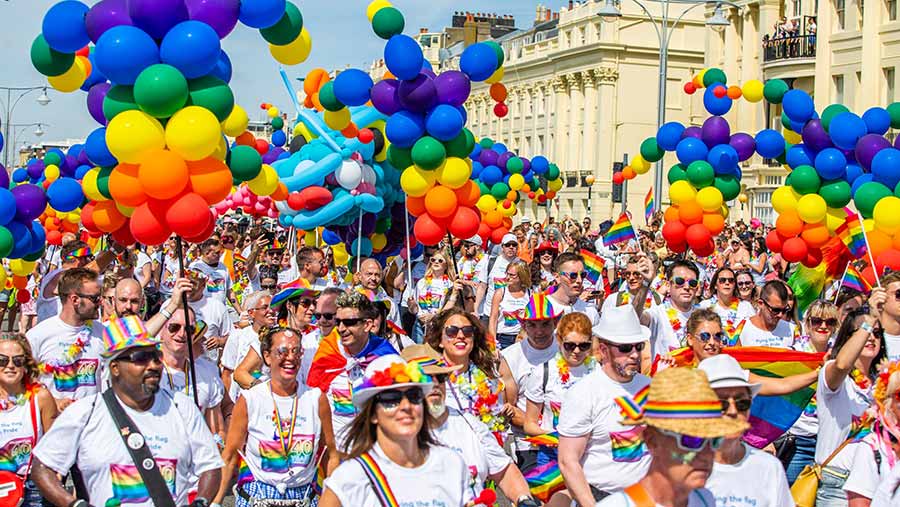 Fifty farmers, agricultural and rural economy workers are set to march through the heart of Brighton with a rainbow-coloured tractor to celebrate farming as an open and diverse industry.

In a first for UK agriculture, the group will walk alongside a colourful Massey Ferguson – nicknamed “Sassy Ferguson” – as part of the Brighton Pride procession on 3 August.

Organised by the farming LGBT+ network Agrespect, and supported by manufacturer Agco, the NFU, Defra and Farmers Weekly, the march is seen as a major opportunity to promote farming to the predominantly urban demographic.

Agrespect was co-founded by Lincolnshire farmer and Farmers Weekly columnist Matthew Naylor and celebrates LGBTQ+ people living and working in the countryside, by sharing stories from individuals who want to talk openly about their sexuality.

“We’re taking part in Brighton Pride in order to promote farming as a modern, open, honest and relevant industry to be working in,” explains Matthew.

“The farming community get stereotyped by wider society, so we want to show that we are actually as normal as anyone else.

“We won’t be marching in drag and we won’t be wearing Schoffels and tweed either. We are there to promote food and farming to the public in a cooler, more urban, environment than the echo chambers into which farmers normally shout their message.”

Farmers are being actively encouraged to come to Brighton Pride to watch and support the group as they take part in the parade. Anyone who wants to be part of the march should contact Agrespect using the form on the website.

“Doing this serves a dual purpose. It’s reaching out to the urban LGBTQ+ community to tell them about food and farming,” says Carl. “It’s also showing farmers that it is OK to be different and work in agriculture.

“We’re promoting our industry in its widest sense, up and down the supply chain, as a positive, progressive place to work. Come to Brighton and support us – everyone is welcome.”