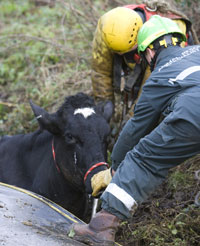 Fire fighters who were called out to rescue cattle trapped in a slurry pit have blamed the incident on ramblers.

Crews from Romsey and Eastleigh in Hampshire responded to the 999 call from a farm at Ridge near Ower, where they found the cattle had already sunk up to their necks.

“The cows wandered in and did not recognise that the slurry pit was not solid ground.”

Fire fighters used harnesses developed by the service’s dedicated animal rescue team, to raise the cows – a dairy cow weighing 720kg and a heifer weighing 600kg – out of the slurry.

Mr Green added: “It was an extremely messy, but successful, rescue which allowed us to make use of the different techniques and equipment that HFRS has developed.

“Both cows are now safely back in their field and doing fine. But this incident does highlight the need for walkers to remember to always shut gates behind themselves.”

Crews were at the site for three hours ensuring kit and vehicles were fully disinfected to prevent the spread of contagious diseases.

Hampshire Fire and Rescue Service has one of the most progressive animal rescue teams in the country. The team of four are all from rural backgrounds with extensive knowledge of animals and farming practices.