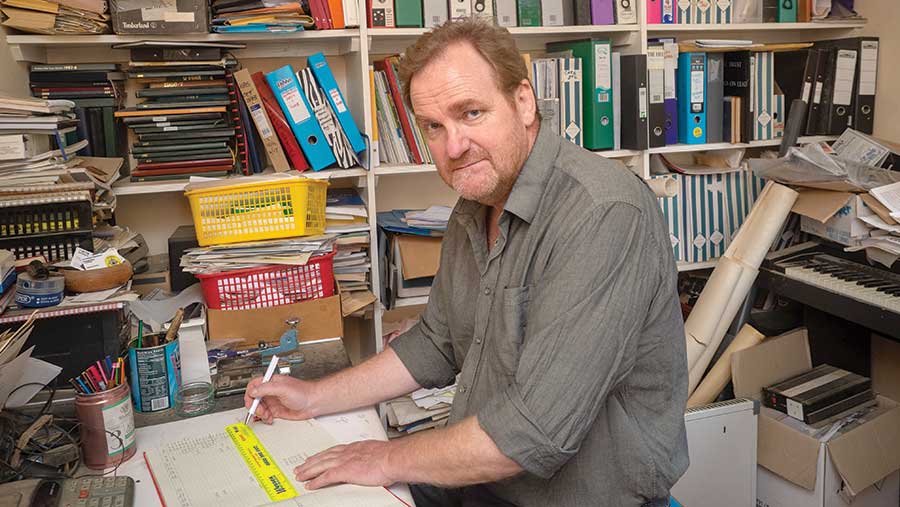 Spare a thought for our landlord’s agent. I bet he usually visits proper farms, with proper facilities for very important meetings: a smart office (probably in a converted barn), with executive tables and chairs and a sharp-suited, stiletto-heeled secretary taking minutes as discussions progress.

Not at Flindt Towers. I had suggested he should pop over for a 9am chat about this and that, and, sure enough, the compulsory Audi arrived in the yard on the dot of nine.

By 9.10 there was no sign of him at the back door. Had he got lost? Had he been waylaid by the ghost of Granny Flindt thrusting a heavenly rock cake upon him? The latter theory seemed likelier when he did finally arrive – white as a sheet.

It turned out that a very nasty back injury was playing havoc with driving, walking, sitting – well, everything. Hence the distinctive paleness of pain.

We ushered him in, offered him a seat at the cluttered kitchen table (declined) and a cuppa (accepted).

So the first 20 minutes of this very important meeting was a comparison of alternative treatments and therapies. Age is truly creeping upon us.

Finally, it was down to business. But three words in to item one on the imaginary agenda, two sweating hulks (our sons) burst into the kitchen, fresh from helping load the OSR into the first Hampshire Grain lorry of the day.

Swift introductions were made, they fetched clean masks, cleared half the fridge and vanished, arguing over who hadn’t refilled the ice tray.

Back to item one: Did we think… but then it went dark as Big Noel appeared at the kitchen window. He’d brought the loader up for a refuel, and wanted to know when the second lorry was due. More introductions.

Just then, lorry number two clattered its way past the house, answering Noel’s question, and he set off after it. I apologised to the agent and hunted down the sweating hulks for more brush and shovel wielding.

They were just settling down to a game of Killer Death Slash Zombie Tank Traffic 6, so weren’t best pleased. Finally, silence.

The agent cleared his throat (wincing at the pain), and tried again: Had we ever thought… my phone rang – it was Hampshire Grain. I apologised again and took the call. Never ignore Hampshire Grain.

“Would you like a third lorry – we’ve one spare,” asked Michael. I checked if this was the extra lorry I’d requested the evening before, but had been greeted with a reply that was too earthy for even this magazine – as familiar as it is with animal fornication and excrement – to print. “Yup, that’s the one,” replied Michael breezily. I told him to send it.

Ten minutes of constructive chat was once again interrupted by the sweating hulks, pleased to have cleared the OSR barn and raving about the yield.

Not usually wise in front of the landlord, but he was so drugged up, I suspect he missed it.

The boys emptied the fridge, flatly refused to do any more shovelling and vanished again, this time arguing over first shower rights.

Lorry three arrived and left with wheat and without incident, loaded from a barn that was going to be refilled anyway, so no sweeping back needed.

Finally, to business – except it was now combine o’clock, time for my date with a grease gun and a knackered fuel transfer pump. The pained agent kindly agreed that we’d meet again another day, and hobbled back to his Audi.

Tell you what: I’d pay good money to see the minutes of that meeting.