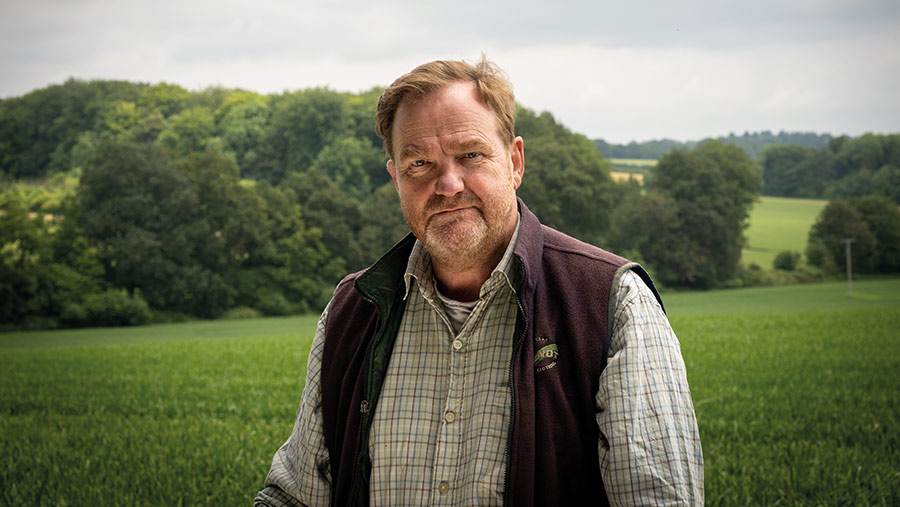 As if the arrival of a new combine isn’t enough (and, yes, it has), there’s the next stage to get excited about: having to buy all the extra stuff that the new machine needs.

I did anticipate that Ad-Blue would be an issue with it, but it wasn’t until I tried carrying a 20-litre drum of it up to the world’s worst-designed access platform (see me afterwards, Claas) that I discovered just how big the issue was.

Switching to a 10-litre drum rendered it slightly easier, but twice as many trips were, of course, needed, and I think I’ve mentioned the platform issue.

Pricey, and I could have sworn it’s just an ATV sprayer kit in blue plastic, but there we go.

Item 2: a lightsaber. Not actually a lightsaber, of course, but it’s about the same length and goes “wom wom” when you wave it about.

No, it’s not a euphemism – it’s a battery powered leaf blower.

I was inspecting the new engine and its associated shiny steel DEF unit (henceforth the “flux capacitor”, although that might be getting our science fiction franchises mixed up) and quickly realised that a weekly hose-down is no longer a dust-removing option.

It’s still a vital job, especially as the flux capacitor will apparently do a ten-million-billion-degree burn-off every so often.

In an arable field. To quote the 13th Duke of Wybourne: “What were they thinking of?”

(Items 2b and 2c: batteries and a battery charger. Item 2d: new earmuffs, so you can blast the dust off the engine and the flux capacitor while it’s running.)

Then we’re into the really serious stuff. Item 3 is a DAB receiver.

Now, I did think I’d ordered a proper bells-and-whistles DAB radio – and I’ll be delving my way back into the filing cabinet to find the bulging folder marked “combine quotes” to check – but in the meantime I’m stuck with a decidedly mediocre FM/AM-only unit.

If I want to listen to Test Match Special (now that the jim-jam cricket has finally stopped) I’ll need LW or DAB.

Mind you, TMS has degenerated into “comedians” talking about cricket, rather that genuine cricket cognoscenti who could occasionally and unostentatiously be very funny.

Rage against the machines

As for my beloved local radio station; it has been taken over by the machines, and seems to play the same six songs on a loop with only gambling adverts to relieve the tedium.

So until I get a proper unit installed, I’ll need one of those clever DAB adaptors that plugs into the front.

We had to get one for our Massey 5713S after the aerial snapped off and we found it’s a roof-lining-out job to replace it. (See me afterwards, Agco.)

It works very well – who knew that there could be so many nostalgia-themed stations? (Items 3b and 3c – 3.5mm jack cable and a huge supply of AAA batteries for when I forget to turn it off at night.)

And all that before new half-moon glasses (for simultaneous combining and screen monitoring), fresh supplies of window cleaner, new craft knife for removing the seat plastic, new rear-view mirror for monitoring the grain tank (dodgy neck) – the list seems endless.

I would say it’s a good thing the combine was cheap – but I’ve just checked the quote.