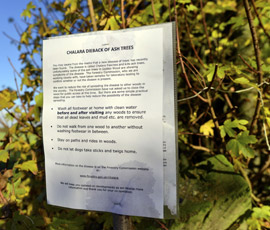 Scientists have made a major breakthrough in the fight against ash dieback disease.

Researchers at the John Innes Centre (JIC) in Norwich have identified a strain of ash tree that is highly resistant against the disease.

In northern Europe, the Chalara fraxinea fungus responsible for ash dieback has wiped out thousands of trees, including up to 90% of ash woodland in Denmark.

In the UK, the disease has been identified at 523 sites, including Norfolk, Sussex, Yorkshire and East Anglia. It is now being treated as a quarantine pest under national emergency measures.

Scientists tested many different tree samples and discovered two that showed high levels of resistance. One of these, known as “Tree 35”, could be crossed with breeding stock from our native ash population, to develop a new variety of resistant trees.

The genetic insights could be used to identify both female and male trees with similarly low susceptibility to the fungus.

A combination of crosses might be needed to beat the epidemic and it could take 20 years to breed enough saplings to re-stock the countryside.

The latest findings give hope to combatting ash dieback in the future especially as it has emerged that, in the UK, the fungus is now producing fruiting body spores (mushrooms) that will cause further infection.

Previously, the disease arrived in the UK by being blown by wind or importation of infected trees from Europe.

However, a JIC volunteer confirmed findings of fruiting bodies at Ashwellthorpe Wood in Norfolk.

A spokesman for JIC said: “The finding of fruiting bodies in Norfolk shows that the ash dieback fungus, at least in the wood where the disease was first discovered, is now taking up residence and producing spores from here.

“This will cause a greater spread of infection because the spores are spread by the wind.”