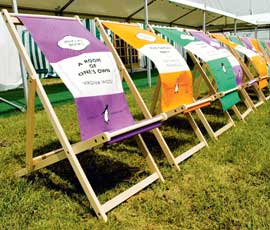 One day in 1987 a few authors got talking in a pub garden and the seeds of the Hay Festival were sown. Now 25-years old, the event draws 200,000 people every summer to a patchwork of farmland in the Welsh Marches to hear talks from their favourite novelists, poets, historians, comedians, musicians, politicians and environmentalists, and to buy their books.

“It’s a huge boost for the area,” says Weobley farmer Stephen Ware, who runs free, self-guided tours of his cider orchards during the festival.

• On the Black Hill, Bruce Chatwin

• Running for the Hills, Horatio Clare

• The Story of an African Farm, Olive Schreiner

Daily farm visits are an annual fixture, and this year visitors can see deer calving at the Welsh Venison Centre, watch sheepdogs at work, shearing demos, sample yoghurts and cheese made for Yeo Valley with local milk, and learn about a daffodil project that is producing a drug to treat Alzheimers. There are also guided walks in the Brecon Beacons and foraging trips led by Hedgerow Handbook author Adele Nozedar.

The invasion of visitors from all over the UK and abroad brings a welcome injection of cash to the town of just 1,900 people, and the economic boost lasts year-round as people revisit the B&Bs they enjoyed, take farm-stay breaks with their families, walk along Offa’s Dyke, canoe on the Wye and indulge in some retail therapy at Hay’s independent shops selling clothes, jewellery, crafts and antiques. There’s even a ‘husband crèche’ at one local pub to give their wives some quality shopping time during the Festival.

But it’s not just local farmers who can benefit from the extra footfall. Stephen urges farmers from other parts of the country to take a break from silage to attend the rural-themed events.

“As an apple farmer, I’m proud of the fact that Herefordshire produces well over half the UK’s cider, yet when you google ‘apple’, you get computers, not fruit. We need to raise awareness of food production in this country, and the Festival is a great forum for that. It’s an opportunity to hear high-profile speakers on countryside issues and to put your questions direct to them.”

• Countryfile‘s Adam Henson talks about his book and hosts a farm picnic, 3 June

• A film screening of War Horse, produced by chair of the Hay Festival, Revel Guest, who also runs a 650-acre stock farm outside Hay

One such speaker is land agent Rob Yorke, who has put together a panel of well-known faces to thrash out issues around food security. He’ll be joined by Royal Agricultural Society CEO David Gardner, LEAF CEO Caroline Drummond and the Chairman of Natural England Poul Christensen.

“The people who come to Hay are intelligent, broad-minded people who are up for a discussion,” said Rob. “That’s why I pitched the topic as ‘Tough Decisions on Food, Flora and Fauna’ – to hold a strong, balanced discussion about some of the possible trade-offs we’re going to have to face in food production. It’s an opportunity to challenge a few beliefs that might be very strongly held.”