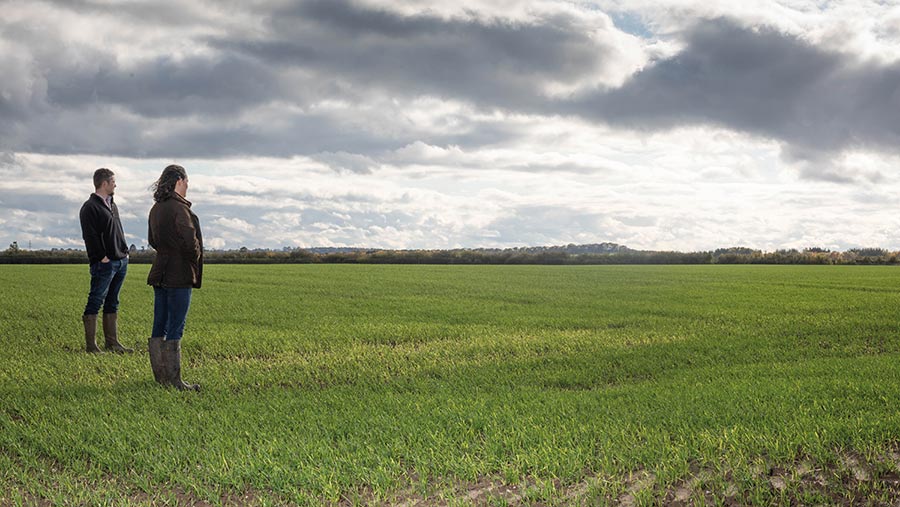 Women, farmers who keep livestock and those running smaller enterprises are the most likely to be struggling with their mental health, results from the recent Royal Agricultural Benevolent Institution’s (Rabi) Big Farming Survey have revealed.

The research was carried out by academics at the University of Exeter from January to April this year, supported by Farmers Weekly, and attracted more than 15,000 responses – mostly farmers.

Presenting the findings at an industry event in Birmingham last week, report co-author Rebecca Wheeler explained that, while 36% of the entire farming community had described themselves as “probably” or “possibly” depressed, for women in agriculture, the figure was 43%.

Similarly, 18% of respondents were found to experience “moderate or severe” anxiety levels (based on an internationally recognised metric), but for women in agriculture it was 23%.

“That is also true within the general population, but I think the differences are more stark within agriculture.”

Dr Wheeler said it was especially prevalent between the ages of 25 and 45, suggesting it was because these women were often carrying out multiple roles on farm, maybe working off the farm as well, bringing up children and having little time to socialise.

The report contains a number of recommendations, including the need for support to be better targeted and tailored to the needs of vulnerable groups, such as young women and upland farmers.

Support should also be available to help famers build social networks, while all professionals working in agriculture should be encouraged to undertake mental health awareness training.

But perhaps the greatest, and simplest, change would be for farmers to take a break.

“We need a cultural change,” said report co-author Matt Lobley. “There is a strong link between getting off the farm and having much better levels of wellbeing and mental health.

“A lot of farmers almost take pride in the fact they never take a holiday and work really long hours. We need to normalise getting off the farm.”

Prof Lobley also urged farmers to give their bodies a break – even if that meant employing more relief milkers or contractors.

“Another one of the surprising things we found was the low proportion of people who would reach out to the farmer help charities,” he added.

“We need to increase awareness of the services on offer – nationally and locally. It’s getting people to make that first step and pick up the phone that’s the difficult part, because of the stigma around mental health issues.”

Prof Lobley added that there was a need for Defra and the government to recognise the degree of vulnerability within farming.

“We have started the most radical transformation of policy in decades and a lot of farmers are not well placed to be able to make the kind of decisions they need to make in order to adapt to the future.

“They [Defra] maybe need to slow down the change, or provide more support to farming charities, to help farmers get through the transition. For some people, the best decision will be to get out. They need to step back and decide what is best for the business, themselves and their family.”

He also recommended a softer approach to the government’s inspection and compliance regime, which put a lot of stress on farmers and could tip some over the edge.

“They need to take into account they could be dealing with someone who is really quite vulnerable.”

One of the most alarming findings of the survey was that 19% of respondents knew someone who had attempted suicide in the past five years. According to Prof Lobley, such knowledge could encourage others to take the same path.

With regards to farm type, there was a strong correlation between farms with livestock and reduced mental wellbeing.

Even though the survey was conducted before the current crisis in the pig sector really took hold, this group showed the highest proportion who were “probably” or “possibly” depressed, at 47%, followed by upland grazing farms and dairy (both 39%). Conversely, just 33% of horticulturalists and 30% of arable farmers in the survey were so classified.

This was probably linked to another factor shown up by the survey – the amount of time taken off work.

“There was a really strong link between this and their wellbeing – so the less often they took a holiday, the more likely they were to be depressed or feel anxious.”

Overall, the survey showed that 20% of farmers never took a holiday, while 45% said they had a holiday less than once a year.

A fresh approach from Rabi?

Ms Chivers said the findings had emphasised the need to build on Rabi’s traditional financial support for farmers who are struggling, to provide better services and mental health support.

The organisation will soon be launching pilots of three new schemes:

“We are looking to supplement the existing online mental health counselling service with bespoke, in-person counselling for farmers on a confidential and almost immediate basis.”

Ms Chivers also stressed the importance of having a partnership approach with other organisations.

“The nature of farming and farming people means that the local connections are all important. We are not looking to extend the Rabi structures when we have other organisations who work both locally and nationally who can provide support to the farming community in a way that best suits them.”

The research also showed some particularly concerning findings for those running smaller holdings – especially male occupants of farms in the 20-49ha bracket.

“They are associated with lower levels of mental wellbeing and tend to be more lonely,” said the report.

“They tend to report poor economic performance, have a more pessimistic outlook on the future viability of the farm and are more likely to lack a successor.”

Factors such as poor income, levels of physical work, lack of labour, use of technology and enterprise mixes were cited as possible reasons.

Age was another key factor, and the survey showed that those of “working age” – in the 16-65-years-old category – had worse mental health than the UK population as a whole, and this “mental wellbeing gap” was widest in the 25-45 age group.

Younger people were also more likely to keep things to themselves, rather than confiding in family, friends or a health professional.

“They reinforced a level of poor physical and mental wellbeing that surpassed my expectation. It is grim reading for all of us, however much we already understood that mental wellbeing in the sector wasn’t great.”

Ms Chivers said there was a raft of organisations that could help farmers navigate the challenges they are facing.

“The most important thing is to reach out and make contact – whether that be with Rabi, or a membership body, or any other charity or service provider in your sphere.

“While it is the hardest step to take, having made that first step, there will be people and services who can help.”

Help for the pig sector

“Data from the survey evidenced that depression rates are particularly high in the specialist pigs’ sector, with 47% likely to be probably or possibly depressed,” said corporate partnership manager, Suzy Deeley.

“The survey highlighted these concerns even before the current crisis. Therefore, developing bespoke, in-person counselling support to supplement existing services, and ensuring this is available on-demand consistently across England and Wales, has been a focus for the charity over recent months.

“The worsening situation and potential of on-farm culls has led to this in-person support being made available immediately.”

The National Pig Association (NPA) said pig producers were enduring the hardest time for more than 20 years, which was putting incredible emotional strain on them.

“The additional support from Rabi has come at a time when our industry really needs it,” said NPA chief executive Zoe Davies.

“It is so important that we look after ourselves and others, so we would encourage anyone feeling overwhelmed to reach out for the support available.”

All those working in the pig sector can access one-to-one counselling via Rabi’s confidential 24-hour helpline, 0800 188 4444. For anybody who would prefer online counselling, Rabi’s online platform can be accessed anonymously any time at www.rabi.org.uk/kooth.